Objectophilia, a type of compulsion in which a person is romantically attracted to any lifeless object. These longings are not new but may seem to be weird in the eyes of the world. Whatever the case be, the person having the attraction may have a long story to tell. 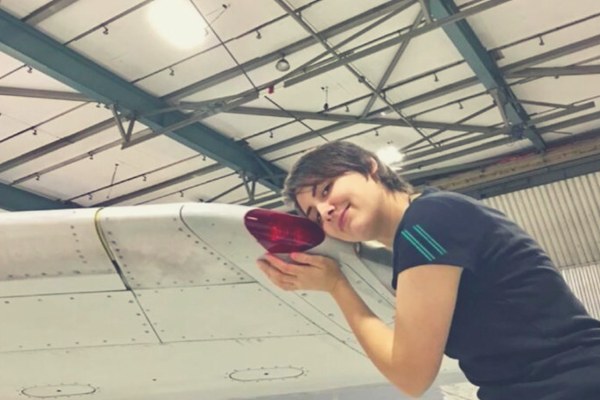 Michele Kobke, a 30-year old woman from Berlin, Germany is very affectionate to have her relationship with an inhuman object which is an airplane. She met the love of her life- the airplane, a 737-800 Boeing plane she named ‘Schatz’ which means ‘darling’ in German, in March 2014 when she arrived in Berlin Tegel airport.

She could meet her love in September 2019 when she was only able to meet it through the glass of the window in the airport and even stand on its wing. She also kissed it when it was in the hangar, an area for housing an aircraft.

Although, her family and friends have accepted the fact that she’s in love with a plane, yet they have no interest in meeting Schatz. Kobke wishes for her wedding to be an intimate affair. She threw light on her relationship describing her precious moment with her love in the hangar.

That was the only time when she could have fun, kiss Schatz and have a good time with him. She considers the hangar to be a home for both of them as there’s nobody to disturb when she’s enjoying the moment.

She also decided to move into the hangar and spend her nights with Schatz. She desires someone to ask her if she wants to marry her 737-800 and she would reply positively, kissing her partner and will be together with him for the rest of her life. She doesn’t want to dress herself the way we all do in a traditional wedding, instead, she prefers to wear black trousers and a black blazer on such a noteworthy day.

She wants her dream of marrying the plane to be true and she has fixed her next meeting with her love in the hangar in Amsterdam, Netherlands on March 18. Michele, a sales worker by profession had met Schatz twice in 2019 and she also has its components to keep herself attached to her love when she cannot meet him and the components include a spoiler, flap track fairing, and a tank valve.

This story shows that some people have a unique desire to be in the bonds with something lifeless and this attraction is based on their belief which tells them that the objects have souls and feelings and they can communicate with humans too.

We are quite aware of these strange incidents and Michele’s case is not the new one and now she is thinking about turning her six years long relationship with an airplane into married life.