When it comes to deciding to keep a pet, people have various options from a dog, to a cat to even a snake. A woman shared some pictures of her pet snail with whom she loves to cuddle. She loves it so much that she does not mind getting covered in its slime. 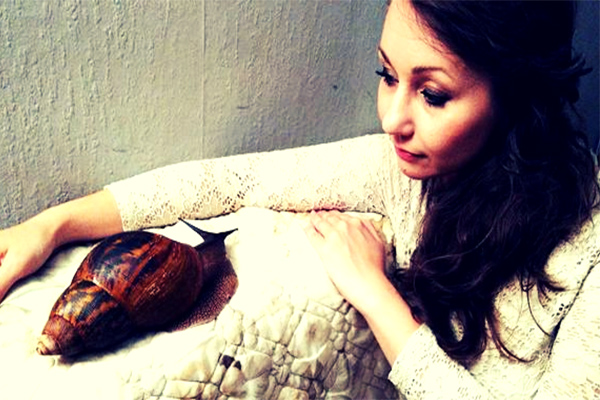 Magdalena Dusza, from Krakow, Poland, adopted slimy pal Misiek after she saw it in the pet shop. She saw that the giant African snail was in an appalling condition in the pet shop. She recalled the condition in which the snail was in and shared that “They kept him in a very small box, with low humidity, which is deadly for snails, and he had an invasion of parasites and damaged shell.”

She also shared “At first when I saw him, I couldn’t even recognize the species. I didn’t believe he would survive the night and didn’t want to pay for an almost dead animal. After a sleepless night, I decided that I have to give him a chance and rescue him. That day, I went back and bought him.”

She was very clear from the beginning that she will have a pet snail rather than a dog or a cat. She shared the memory where she fell in love with snails and knew that she will own one one day. She shared that “I had dreamed about owning a giant snail since I was in primary school. We had a similar snail in our biology classroom as a school pet, and I fell in love with these amazing creatures.”

She knew the space he would require if she adopts it and despite that, she adopted him and his pal Misiek now has a 130-liter tank which makes it easier for her to look after him. It’s been six years that she rescued Misiek from the pet shop.

She further shared her pet’s eating habits and her pets mostly eat vegetables and fruits which makes it very easy for her to take care of him. She shared that “His favorites are sweet potatoes and bananas. He is also a great fan of fish flakes food. Snails do not have very complex nervous system, so we don’t interact in the traditional sense like a cat or a dog. However, this really doesn’t stop me from talking to Misiek every day.”

Well, it is not easy for her to pet a snail and it is not her pet giant African Snail that makes it tough for her. But people reading and seeing her posts and pictures on social media handles that makes it difficult for her to take care of her pet.

She shared that “There are also sometimes negative reactions, like people being disgusted. Sometimes they try to joke and ask me if I am going to cook and eat my snails, but to be honest, it is not really funny at all. Despite these comments, owning Misiek is a very unusual but rewarding passion, especially when you can observe your snails growing big and healthy. Because they are so slow and majestic, observing them is good for nerves, it makes you calm and relaxed. I would advise everyone to go and get giant snail for their own.”