A woman named Jasmine Seales is creating new waves by performing the acts of a mermaid. Jasmine dumped down her previous job as a funeral director to live a thrilling life of a professional mermaid. The artist is mounting a sum of $120 per hour. The 28-year-old woman performs her beautiful acts at various events. 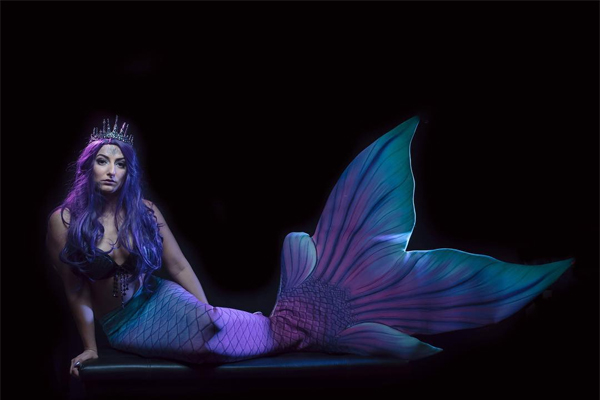 Mermaids are the queens of the marine kingdom in the world of fantasy. Many girls dream to live the sparkling life of that beautiful creature. To their delight, they may now live that phase by taking up the job of professional mermaid! A woman named Jasmine Seales has brought that facet as she works as a professional mermaid.

Jasmine was toiling hard to live the life of a funeral director. The environment of grief and pain was dampening her spirits. She had to deal with the mourning families who had lost their loved ones to the gloomy fate. Sometimes, she “ended up crying” on seeing their pain and sufferings. She was losing out on her strength to bear that situation. Thus, she wanted to get out of that profession and live a thrilling life.

Finally, her prayers reached heaven! She visited the Bestival on Isle of Wight one day. She saw a mermaid performing her beautiful acts there. The woman from Basingstoke lost her heart to the performance. She went ahead to talk to the artist. After getting to the length and breadth of the profession, she decided to give it a try.

But it was not a cakewalk for her. She had to work hard to grab the skills of underwater acts. The woman put in her might to hold her breath underwater. It took her many hours per day to hone that part. As a result of rigorous efforts, she can now hold her breath for two minutes and thirty-five seconds in the water.

Not just the breathing skills but one also has to grow an affinity for the mermaid suit. The costume has a tail of ‘dragon skin platinum silicon’. Jasmine poses for photo shoots and performs in various events to make her mark. She displays her acts at birthday parties and various other events that get a pool for her. She earns at a rate of $120 per hour.

The woman is in love with her job. She is in no mood to give it a second thought. She shared that she would do it until it put her in a wheelchair. Thus, the degree of hard work embedded in her job could not deter her from pursuing it to the great lengths.

Shedding some light on her training part, she said, “I train once or twice a week and just being in the water in general really helps [keep] my body in check. When training, you have to learn how to control your breathing and your heart rate to be able to perform underwater for prolonged periods of time”. Adding to that, she said, “At first, it feels pretty unnatural, but the more you do it you become used to it”. She described it as a creative thing.

Not just that but she also presented her art at Miss Mermaid UK pageant competition. The artist is a patient of Fibromyalgia. But that is not enough for her to put her work down.

Tonnes of good wishes to the professional mermaid! Hopefully, she would manage to make a mark through her underwater art.