We all want to keep the belongings of the person we love after they meet their end. However, this woman did something bizarre. Her husband asked her to preserve and display his skin in his tattoo studio after he died. 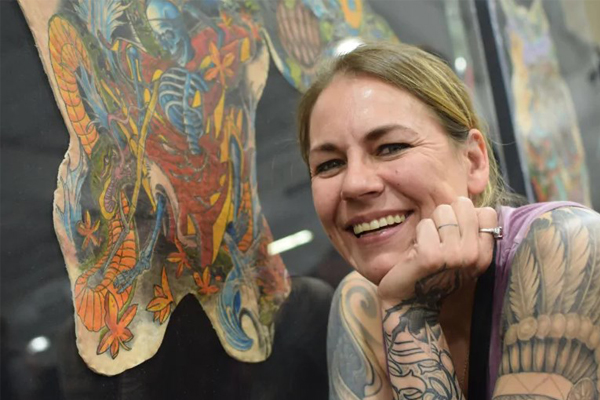 The tattoo art on Chris Wenzel’s body was precious for him. The 41-year-old tattoo artist asked his wife Cheryl if his inked skin could be preserved after his death. He wanted his kids and his grandchildren to know about his art and admire it even when he isn’t present among them.

The wife was cool with his wish and said, “I thought, that’s different, but yeah, that’s cool. I don’t care what it takes I’m going to get this done for him.”

“You can hang a picture on a wall. A tattoo is something that has been done for hundreds of years. It’s just preserving it.”

Chris was suffering from ulcerative colitis. it is a condition in which a person experiences fast or irregular heartbeat.

Last October, he was complaining of chest pain and died in his sleep. His wife then turned into the business of preserving tattoos of the dead. It was a family business in the US.

Kyle Sherwood, the co-owner of the company said, “Tattoos, you know, tell a story about a person.

“And for someone to get something tattooed on them that they’re displaying for life, you know, means something to them. You wouldn’t burn or bury a Picasso and that’s what some of these pieces are.”

The company, Save My Ink Forever, spent three months on Chris’ body and the surgical process was complicated. This turned out to be North America’s largest tattoo preservation.

Chris himself was a tattoo artist and owned a studio. He made his first tattoo when he was just seven years old. His wife has tattoos on her body as well. She plans to preserve it and would ask her kids to hang it next to her husband’s tattoo.