How will it feel when someone stops you from doing something you have been doing for every single day for more than half of your life? This man was put in the exact same situation when he was banned from seeing his wife and he opted to start a one-man protest against it. 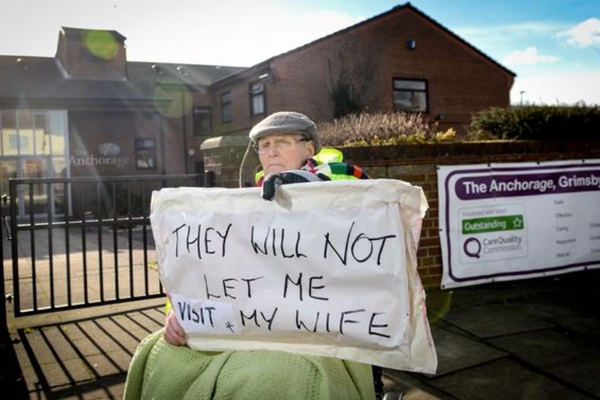 Dennis Daniels, 89, an old age person who has spent each and every day with his wife was recently banned from seeing his wife, Dorine, 70 in Anchorage Care Home in Grimsby. Reason being that he was being too loud and disruptive in the premises.

According to Dennis, he had been facing issue in the care home which is specialized in enhanced dementia care and it also included the behavior of the fellow residents. The situation got worse when people starting banging Dorine’s door and began shouting at her.
He said that they tried calling someone for help but no one came for the next few minutes. After the incident, the manager asked the 89-year-old to leave the home care. Dennis who hasn’t left his wife for a single day in their marriage was asked to not see his wife at this age.

On the night of the incident, the manager told him that he was being disruptive, loud, abusive and temperamental, whereas, he was trying to get some help for his wife. He then decided to start a picket outside the Anchorage Care Home.

He says that one resident has been creating problem for him and his wife. He understands that he is not well and the care home is the best place for him to be cured but he is also concerned about the safety of his wife at the same time.

He then sat outside the care home on a wheelchair and asked the passing by motorists to support him. Even though the issue is still there but Mr. Daniel has said that his wife has been very happy in the home care and the staff is doing their job tremendously.

The spokesperson for the home care said, “We recognize the complex and sensitive issues around this particular situation with Mr. Daniels and his wife, a long-time resident at the Anchorage. It is not a straightforward situation. Mr. Daniels is a regular visitor to the home, usually seeing his wife daily. They have a loving relationship, which we respect. We’re a little surprised by his recent actions. Our dedicated staff is always monitoring the wellbeing and safeguarding of residents. We are trying to engage with Mr. Daniels and have called in the support of local Social Services to reach an amicable solution.”