There was a house located in New Jersey which by looking at its exterior seemed like just how any other house would be but if one goes inside, they would assume that the owner of the house might as well be Santa and Mrs. Claus. Thanks to the people at Digg, we have got to know about Janet and Christopher Munger, two siblings who lately offered their 5,420 square foot property on the market for sale. 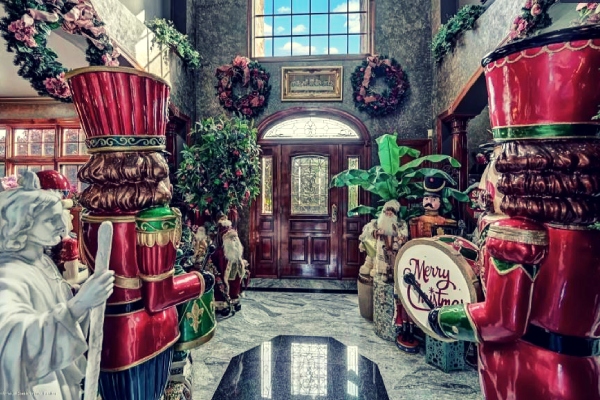 The brother and sister were startled when their Zillow listing all of a sudden got thousands of page views. The answer for why they gained so much popularity online is because the images which they used to advertise their property showed how the interior of the home was a permanent Winter Wonderland. This made people really intrigued by it.

Janet and Christopher Munger were always fond of collecting Christmas decorations, but especially Janet. The extravagant exhibit inside their home was a result of years and years of gathering everything holiday-themed she could find. Her love and excitement for the holiday season was so strong, that she left the festive decorations up all year long. It basically is Santa’s North Pole home, but only with the North Pole situated in New Jersey.

All the rooms in their house were occupied with life-size nutcrackers, garlands, wreaths, stockings, and holiday statues. Breaking it all down by the numbers, there are 81 wreaths, 30 Christmas trees, 20 nutcrackers, 38 Santa Claus figures, 14 Nativity Scenes, and a whopping 238 angels.

Christopher Munger never denied the fact that they had more Christmas decorations than one should actually have in their home. He said that his sister had an excessive liking for the decorations. He also admitted that they did damage everywhere. Considering that the home didn’t seem to have a single room not touched by Yuletide cheer, it would seem that the assessment is accurate.

The people were much aware that although the house at 1 Rivers Edge Drive in Colts Neck, New Jersey was for sale for $2.19 million, the extreme holiday decor which they did was likely all going along with the Mungers when they shift to Florida. But still one could assume that maybe they’ll feel the spirit of the holiday held more value, and leave some decorations behind for the next owners. We were pretty sure that’s what Santa Claus would do!