Boarding a flight with a baby can be painful. It is embarrassing to see others suffer because of your little one. This mom knew how disturbing it can get. Hence, she made a little packet for two hundred co-flyers and this is the sweetest gesture in the longest time. 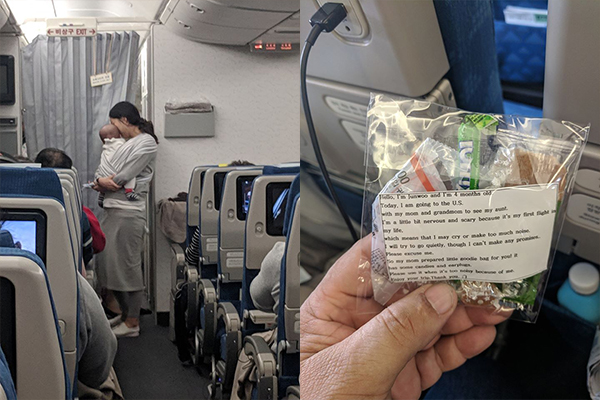 The cold sweats you get when your baby makes that crying face is too much. When you are on board, the sweat showers get doubled or maybe quadrupled, depends on the volume of your baby. A new mom knew what pain it is to sit next to a howling baby. Hence, she made two hundred goodie bags which were stocked with candy, earplugs, and a typed note written in the voice of her infant son Junwoo.

She wanted everyone to know that she understands how painful it can be but all her son can do is to keep himself calm throughout the flight. The baby is just four months old and there is a huge possibility that he may or may not freak out during the journey.

She tries to say on behalf of his son that he can’t make any promises but all he can do is try. Hence, the mother made the goodie bags.

A passenger posted the picture of the goodie bag and the message written on it. It is an impressive thing to do and thoughtful as well, it was a 10-hour long flight. The caption read, “On a Ten hour flight from Seoul Korea to San Francisco, a mother handed out more than 200 goodie bags filled with candy and ear plugs, in case her 4 month old child cried during the flight. A very touching gesture by the mother but as you know when you have kids expect the unexpected.
Not a peep out of the kid.”

On a Ten hour flight from Seoul Korea to San Francisco, a mother handed out more than 200 goodie bags filled with candy…

People definitely had opinions on this one. How can you expect not to have an opinion about anything?

Crying tops the chart of things infants do in the early months and it is obvious that he would cry when the pressure changes. A mother said exactly that. She wrote, “Being a mother, I would have said don’t worry. The pressure change in the plane affects all, babies most of all. If people can’t understand that then they are uneducated on the matter.”

Parents are so messed up during the early months that they are always sleep-deprived and forget to pack their belongings. This woman managed to pack 200 goodie packs and that is commendable.

Another mom said, “Everyone forgets they were not a perfect silent baby. Grow up you complaining adults!”

Another person said that tolerating such a baby is not as torturous as some of the other fellas. She wrote, “I’ll take a crying baby over the jerk who sneezes and doesn’t sanitize any day.”

Well, that is true to some extent because we have seen some disastrous human beings.