We have been loving McDonald's and the happy meals have been our favorite. Other than the food, the toys have had our hearts. This father is furious when he got her child the most favorite thing – The happy meal and found a razor blade in the pack. 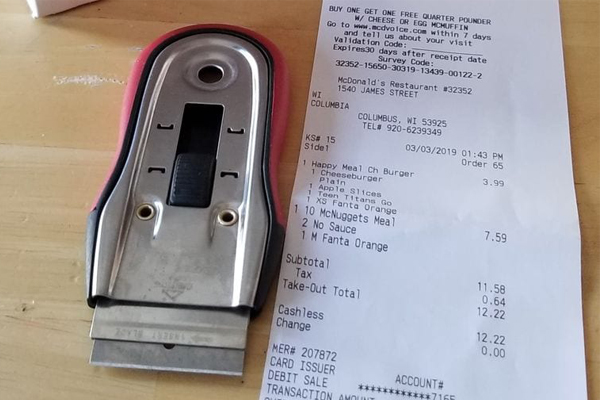 McDonald’s has come up with a tool that has a razor in it and that is what a four-year-old chap got in his happy meal. The boy who hails from a family in Columbus, Wisconsin was super excited to get a new toy and when he got it in his hand, he started waving it all around and that is when the father noticed that it was a razor knife.

The father, Scot Dymond said, “The manager said they were sorry, and they could comp us a free meal.” The apologies didn’t work for the dad and he was worried about the fact that how could they commit such a huge mistake. He said, “I don’t want a meal. I want my kid to be safe and everyone else’s kids to be safe.”

During the investigation, the police found out that a tool is actually a tool that is used by the staff to clean the machines in the restaurant.

After this was posted on Facebook, people were shocked and thought that it might have been placed by a member of staff who was angry with the food chain. Some said that they would never eat there. There were people who believed that it was nothing but a conspiracy.

The authorities have an explanation for the incident and that is – “the tool must have fallen off a shelf and into the Happy Meal bag and that it wasn’t intentionally placed to cause a child harm.”

Lt. Dennis Weiner said that one should be careful about what you give to children ad it always needs an extra eye.

Well, that is not the only reason. Parents should be sure of what are the kids getting themselves when it comes to food. The parents should be able to trust a restaurant/food chain with the basic safety standards.