Did you know Dentophobia was a real phobia? People dread to go to a dentist and they can’t even avoid that one appointment. However, there is this one dentist who knows a way out of this fear and is doing the best he could. 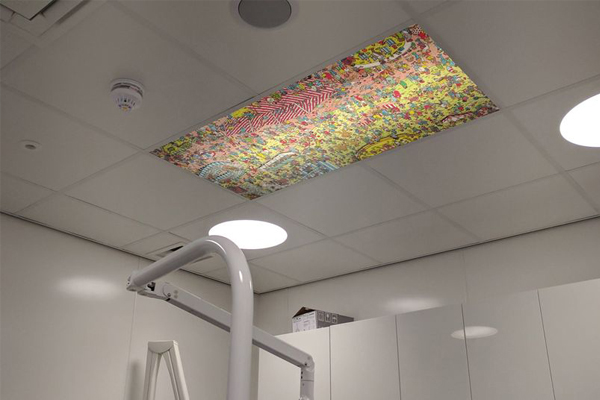 Michelle Mannion, the big fan of the innovative idea revealed the whole interior on Reddit. He said that the patients of MyDentist in Rugeley, Staffordshire don’t have to worry about pain. They just have to lay down with open mouths and have to do a minor brain exercise. No pun intended!

A picture on the ceiling called ‘Fairground’ is an unusual decoration that is placed just above the cair f the patient and it gives them a perfect view while the dentist does his job.

This piece of entertainment is way more popular than you think. People are not comfortable thinking of someone snooping in their mouths and this fear has some serious effect on their teeth. Other users were jealous of the kind of creativity this doctor had.

One of the users knew what that fear felt like and commented, “Jealous!”

“I know my dentist have Phillips lightbulbs and has had the same 6 dead flies trapped in the fixture since like 2011. I always play the game. How many words can I make out of Phillips? Pill, lips, hill, sill, …. That usually last about 2 minutes.”

The surgeries in places like Crawley, south of London, or Bellshill, Scotland were not innovative and hence, painful.

The big fan said, “The poster was probably put up for children specifically, but I know it would calm me down and distract me no matter what age I was. They only have one room for examinations, so all patients will see it.”

We gotta see this clinic because we can’t bear this pain again when there is an option of admiring a picture.