This aw-dorable bunny is getting all the attention on social media after she traveled in a first-class cabin with her owner on a flight from San Francisco to Japan. Donning a cute little bow tie, she got to experience what most couldn’t even dream of thinking. 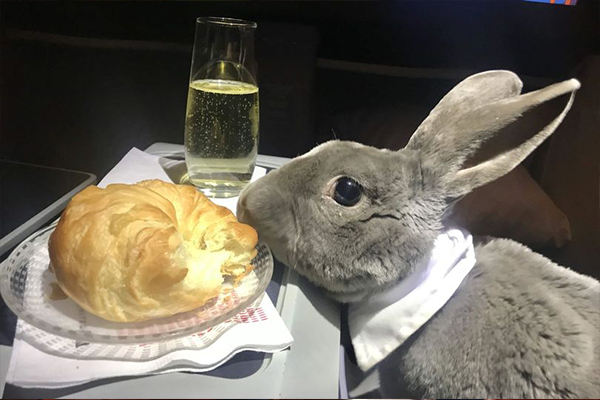 Hold on to your hearts! Cause we are about to introduce you to the cutest little bunny on the planet. Oh! She also wears a bow tie. Talk about pure love.

Coco the Bunny is taking over headlines for living a life we wish we could live. The classic blue mini rex was seen enjoying a business class flight with her owner on an 11- hour United Airlines Flight, with her having her own seat and cushion to snuggle up and make herself comfortable. However, she is accustomed to flights as she had taken one when her owner first moved to San Francisco, three years ago.

Talking to Insider, her owner, Takako Ogawa said, “I was returning to Japan resigning from google to start my new career. I couldn’t leave her in the States, so I took her back with me”. The Co-founder and CEO of analytics start-up Panalyt had to register Coco as an emotional support animal in order to have her on the airplane cabin with her. She had to pay $100 for the same. But for her benefit, she didn’t need to buy an extra seat for her.

And when the cabin crew let her know that the seat next to her was empty, she was more than delighted to let her Rabbit free from the hold to enjoy the luxurious life.

“I thought it was super nice of the flight attendants to let her use the unoccupied cubicle next to me, and for bringing her treats throughout the trip.”. She further added that the Cabin staff loved the bunny so much that they would even swap duties with each other so they would have a chance to meet her. Such a high life!

Ogawa was initially worried about her bunny as she is too old to travel in the animals’ cargo. She explained, “What happens in cargo is that there are a lot of anxious animals on the plane with her. Dogs will be barking all the time. This kind of pressure might have been bad for Coco because she is older now”.

Takako also exclaimed that this was one of the best flights she ever had, with the staff offering treats to Coco as well. You could see her munching on almonds and croissants during the journey.

Most of the time, we can expect animals to cause nuisance when they are new to an environment. However, this was not the case for her as Coco was calm throughout. “I was nervous. She did hop around, explore the pillows, but only in her own cubicle.”

Her owner explained that she’s very calm being surrounded by people and in a different environment so she had taken the journey well. Well, that’s what you can expect from our Coco the bunny in a bow tie.