In a wedding there is mostly one or two bridesmaids or at most four to five with their partners. No one generally exceeds this number but this bride changed the course and had 34 bridesmaids for her wedding. 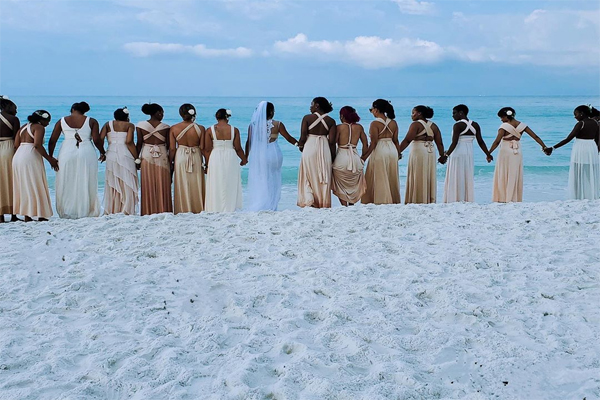 Casme Carter got hitched on June 2 in Destin, Florida. She had not one, not two but thirty four bridesmaids and had actually planned on having 50 ladies but some were unable to make it due to several reasons.

Carter has been a part of a lot of woman empowerment groups and hence she had many lady friends. “I wanted them all to experience the love that they’ve seen that I’ve been praying for and wanting. I wanted them to witness it first hand,” She said.

Initially, Casme’s to be husband, the groom Gary Carter did not take it seriously. Carter explained: “He thought I was joking but then he was like, ‘If anybody can do it.’ He knows how I am and how many women are around me.” Gary was also concerned that he would not be able to match that many women with men.

It came more of a shock to the bridesmaids too. They were not aware of Casme’s plans and did none of the bridesmaids expected that there would be 34 women in the wedding. Casme cleverly set up different invite groups and divided the bridesmaids and gave them the same details.

When you from New Orleans but your Tribe travels to Destin from all over the World to witness your BIG Day!!! 😩😩😩😩I’m so blessed!! I love y’all!!! #celebratingthecarters #destinflorida #neworleans #married #blacklove 📸 by @homeland_photography_ 😊

She noted: “When they saw everybody they were like, ‘Oh my God, Casme. This is so awesome!'” Sharing the whole experience, Casme noted that she was happy that everyone was able to make it and their presence was the only gift for her.

Sharing her story, she tells how she had always dreamt of a beach wedding and being a wedding singer for at least 50 weddings she was sure that it had to be beach wedding. She also shared how the couple got married only after three months of being engaged.

Casme had been preparing a Pinterest board for her wedding and she had it all printed and hence she was able to pull this massive wedding in such a short time. Carter comments: “Everything about this wedding was different, it was so amazing to have them all right beside me.” We hope everyone had good time and The Carters have a wonderful married life and organize more such joyous events in the future.