Prom is one of the most awaited events in high school. The students are thrilled to go shopping and find a stunning dress. They can’t wait to jump on the dance floor to flaunt a few moves that they have learned. This 97-year-old never got to wear a prom dress and have that experience. So, her granddaughter helped her fulfill this dream and it couldn’t be better! 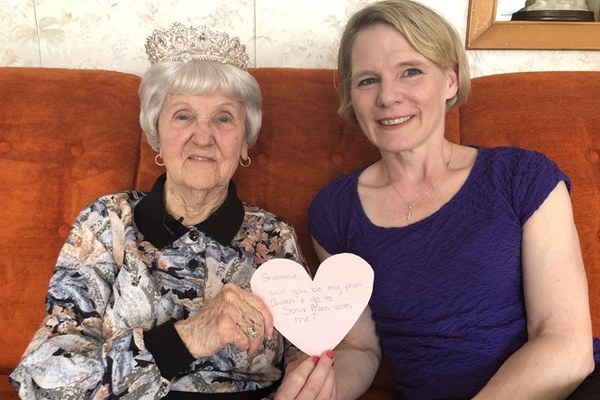 Helen Danis, 97, had never imagined that she would be able to have a prom experience after all these years. She might have skipped it during her high school days but her granddaughter took care of her wishes and made her enter a prom night at school. We need tissues, already!

We can spot excited faces at the big dance dressed in beautiful outfits and want to create memories that will stay with them for a long time. But who said that these memories can’t be created when you are 97? Danis has inspired many, we can bet on that.

This amazing prom-goer from Rhode Island had to face a few obstacles during her high school days almost 80 years ago. She told in an interview, “I couldn’t keep up with the kids. I didn’t really fit in. We were in the middle of a depression and money was scarce.”

We are just in awe of Huddon, her granddaughter who has taken the initiative of fulfilling her great-grandma’s wishes that she has been holding on for a long time. How thoughtful of her!

“We’ve been doing a lot of things that she has said she wanted to do. She sat on Santa’s lap for the first time in December”, Huddon said in the interview.

New on the night team— a “PromPosal” for the ages. A local 97 year-old is heading to Pilgrim High School’s prom, she never got to attend her own. It’s a story you don’t want to miss @ 11. @NBC10 pic.twitter.com/u0D9qKpL2o

This time she arranged her entry at a prom night event in Pilgrim High School that her son attends. She took permission from the principal and everything was set. Danis revealed this kind act by her granddaughter, “I never know about her, she’s full of surprises.”

Julie Huddon followed all the steps involved in the prom and started with a “promposal”. She wrote in the note, “Grammie, will you be my prom queen and go to prom with me?” She also got a crown for her along with this sweet note.

Huddon had to take her to prom as that was something very close to her heart. She said that Danis loved the invitation and looked forward to dancing! She got a new dress and the zeal kept rising as the day approached. “Well, if they know how to do the Hully Gully, I’ll do it again”, said Danis.

Danis did great at the event and even received the title of prom queen. Huddon said, “I feel blessed that I can share some of her memories. I’ll always remember this night.”