The beginning of an academic year is always a busy time with an incessant increase in the demand for desks and other accessories. Moreover, if you’re a college student, you’ll always feel the lack of adequate space. So, Ashton Stratman residing in Columbia, Missouri found a better solution. 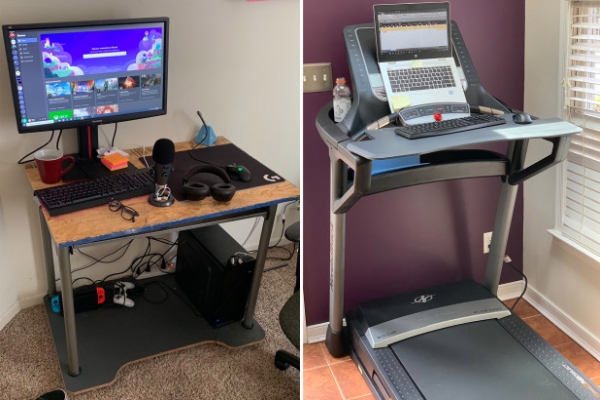 Meanwhile, the trepidation in 2020 has deeply affected all walks of life, which also includes school and college supplies. There’s been a shortage of almost everything, ranging from toilet papers to desks as well. When the entire world has been working from home, it’s obvious to have things like desks as a necessity. Some surveys pertaining to online shopping behavior shows an increase of 283% in the e-commerce sales of desks. This, in turn, has created a scarcity, thereby, leading to a price hike.

However, people like Stratman have an answer to their miseries. She had moved into an apartment with three other roommates. So, space is definitely an issue for her. She piled up the cardboard boxes over the top of a clothing trunk. Plus, a dresser drawer became an alternative for her computer desk, while the other dresser drawer could be used as an armrest. The upshot was indeed a pièce de résistance and boosted her confidence too. Now, she usually spends her day on a desk that’s another contender for a good piece of work.

She put up a piece of plywood on the top of an old desk with a shattered glass top. She also put 12 books underneath to make it stable. “It’s kind of sad because some of those books I was reading, but you got to sacrifice sometimes,” she added. Likewise, there are several examples of similar improvisation on the Internet. An image on Twitter shows a laptop, keyboard, and a mouse placed on top of an ironing board. A school teacher used her basement ping-pong table for her online teaching schedule. Also, another image has a worker sitting at the bathroom vanity with two monitors plus a laptop.

Kimberly Fricker, 34, from Richmond, Virginia, felt that her standing desk was proliferating her upper-back problems. So, she placed her keyboard and laptop on the top of a treadmill’s screen. Now, she can work as well as walk for half an hour. She uses it twice a day as it has been effective in reducing the risks for her upper back. “I was like, ‘This could work, I’m not sitting for a little bit. It’s a good way for me to be doing something and not just sitting around.”

So, with the lesser availability of desks, there have been more instances of people coming up with some flamboyant techniques to get rid of their problems.