Being a human, we develop the propensity to see people of different age groups concerning their stereotypes. On the other hand, few people are there who don’t need to know these boundaries. They often enjoy being different and as a result, their uniqueness grabs the attention of the masses. Yes, pal, we’re here to talk about our grandparents. 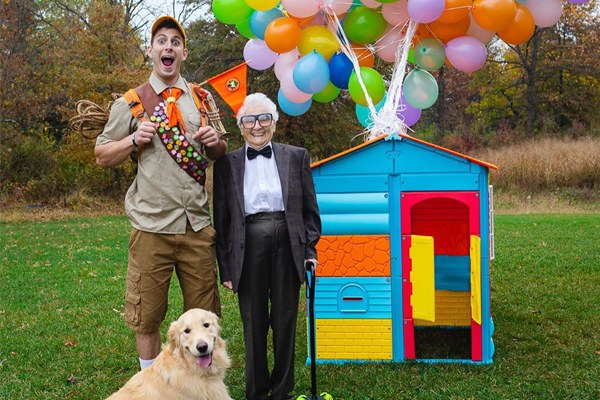 Instead of just providing you the necessary lessons, they can be a participant in your fun-to-be activities. There is a certain level of both insanity and love in the bonds between a grandparent and a grandkid.

Similarly, Ross Smith who is 27 years old loves to be with his 93-year-old grandmother, Pauline Kana. And yeah, these guys are very different from what you expect them to be. Instead of just having a good time conversing with each other inside the four walls, they believe going out and taking pictures with imbecilic actions to be more interesting.

Ultimately, the pictures and videos of the duo have created a wave of admiration among the users of the internet. This enthusiasm began seven years ago when Smith was a student at the University of Dayton in Ohio and he had uploaded some videos on Vine, a social platform. Those videos showed his grandma blocking a basketball shot. After the video went viral, they both earned huge fame on the internet.

Who’s winning the super bowl today? If you can guess the exact score & winning team – we will send you a 💯 dollars 🏈 🏆

In an interview held in 2018, Ross Smith said to CNBC, “My brand just turned into me and Granny taking on the world.” For Halloween, the duo put up their costumes to look like the Disney movie characters. When it was time for the Super Bowl, they dressed up as the footballers. And if these instances seem nothing new, then they also decided to become the “Avengers” with Ross being the Captain America and his grandma holding the infinity gauntlet.

Well, there’s also another one where grandma Kana has become a Christmas tree which is about to be cut by Smith. Kana explained CNBC that people of older generations aren’t habituated to using social media to this extent.

Grandma always wanted to see the Hollywood sign. So she dressed up like a flapper from her childhood during the roaring 20’s, then we found an old vehicle and drove it up to the sign! What a cool experience! #bucketlist

This is the reason why she loves to be different along with her grandson. The pictures are often shared by Ross Smith on his Instagram page. In all these photos, you can figure it out easily that Kana is not busy in the works in which the usual grandmas are inclined to, be it playing indoors or knitting.

She enjoys her uniqueness and as per her conversation with CNBC, she has also become a celebrity in her locality. She says, “Even when I’m walking to the plaza, which I live about three blocks away, sometimes people going by with their cars they stop and say, ‘You’re Granny!’”

She continues, “When I get to the plaza, the people in the stores they come up to me. It’s just a party at times.” Obviously, the credit for this lovely appreciation goes to the netizens and more specifically, to Kana’s grandson, Ross Smith who loves showing his grandma’s bold and humorous side.