If you want anything to go viral on the internet you just need to make sure that the content is good. Internet does wonders when it comes to connectivity. An 18-year-old girl living with her aunt made her bathroom viral after she saw the hilarious tile pattern. Though a hilarious tile pattern, it is an epic decorating disaster. 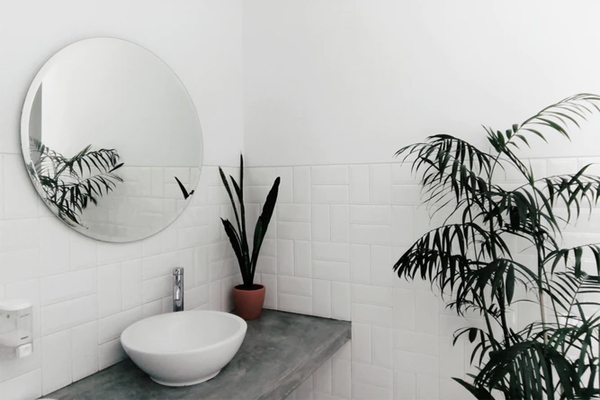 Yaimerie, 18-year-old arrived in the Dominican Republic to spend her holidays and is living with her aunt while she is here. While wandering around the whole house she noticed an epic decorating disaster in the bathroom. She was quick to notice the decorating disaster made in the bathroom of her aunt’s house. The whole walls were covered by the same tiles except a line in between breaking the consistency.

The white pattern of the tiles was broken by a design of a banner running in between the tiles. The banner consisted of a starfish leaning down on a pile of towels and the left corner ‘sample text’ is written. Her aunt was unable to find the decorating failure because she does not speak English. Other than that there are weird patterns and designs in the space.

As soon as she saw the epic decorating fail in her aunt’s house she snapped a picture and uploaded on her social media handle with a caption, “B**** I land in Dominican Republic earlier and I go to use my aunt’s bathroom, this is their tile I’m screa.” She was excited to post the pictures that she didn’t even check her caption for any grammatical errors.

She admitted that she was all over the place after finding the decorating fail that she did not think of anything else but just posting it on her social media handle the account. But some grammatical errors did not stop the tweet from going viral. The tweet went viral in a short period and gained 82,000 likes. It not only got likes but comments and re-tweets as well.

Some comments were such as “I feel like buying Shutterstock stock image wallpaper now.” Another said: “Somewhere out there is a white girl with ‘sample text’ tattooed on their body in Chinese.” The kid studying kinesiology in Louisiana State University explained why her aunt did not find anything wrong with the tile and how she reacted when she told her about her bathroom going viral.

Yaimerie shared that “She doesn’t speak any English so that’s why she probably didn’t see it as a big deal when they got those tiles for her bathroom. When I first saw the tiles I thought it was in a fever dream, but it was so funny to me. I told my aunt about how it went viral but after that my cousin and I had to explain why it was funny, she thought it was kind of funny too. She’s definitely going to leave the tiles like that, it’s more funny than embarrassing and not that big of a deal.”

Her aunts call her bathroom the ‘famous bathroom’ and do not think that it is a big of a deal. She is also happy that because of her many got a chance to laugh in such a busy and chaotic life.