While there are women working in all the possible jobs as men do and many times earn higher posts than men. Women have been serving in the army for a very long time but the kids get to play with only with plastic figurines of army ’men’ and no army ‘women’ until recently a six-year old’s letter prompted a company to release ‘Plastic Army Women’. 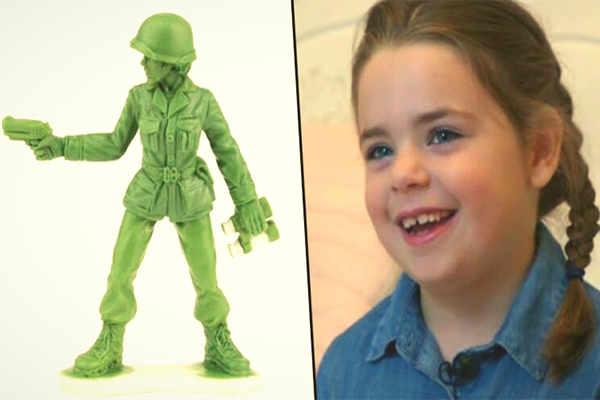 Vivian Lord is six-year-old girl living at Little Rock, Arkansas. She is a fan of the army and one day while playing with army figure toys that belonged to her brother, she realized that none of the figurines looked like her.

She was unhappy with this discovery and vented her frustration in a letter she wrote to several companies manufacturing the army figurine. In her letter the little girl argued and requested the companies to ‘make army girls that look like women’.

One of the companies she sent her letter to was BMC Toys in Scranton, Pennsylvania and Jeff Imel, the owner of BMC toys got her letter and was amazed as he had never got such a letter from a child. Jeff has since then making female army figurines on top of his list of works and has even sketched some prototypes.

Although, Vivian didn’t understand why it took so long Jeff wanted the figurines to be perfect and he wanted to make sure the demand is high. He noted: “I’m not a big company. It’s expensive to produce a new figure set. So, I’ve got to do my due diligence and make sure it’s something people actually want.”

Jeff has already commissioned the first prototype and has even promised to release the green army of women figurines by Christmas 2020. The figurines will come in four different military poses ready to attack.

Jeff has been planning to launch female army figurines for a long time but due to time and budget constraints he was not able to do so until recently he was moved by Vivian’s letter and decided to move forward with the plan, finally.

Vivian’s letter made a compelling case as she mentioned about her friends’’ mothers working in the army and also wrote that she and her friends would play with the figurines every day. After Jeff agreed to make the figurines Vivian was ‘super happy’.

Jeff, working on more prototypes noted he was happy that his toys will help girls ‘be the hero of their story’. He noted: “Girls should be able to connect to the toys just as much as boys do.” Well done Vivian, you have achieved a great milestone in the toys’ industry.