AirPods are surely great, aren’t they? With such cool looks and swag to carry them, they don’t disappoint, not even for an instant when it comes to perfect sound. And the best part about these little sound machines is that there are no wires to crumble about. So why would someone leave them randomly in a street? 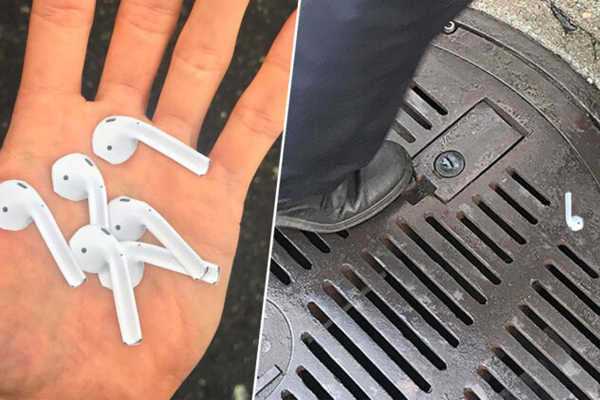 AirPods are small and easy-to-lose- just a blink of an eye and these little machines will go flying across the pavement, probably down a musty drain or possibly somewhere you can easily find it, if you have got those lucky stars in your destiny.

Seen almost everywhere and every time, people in various cities often stoop down, which they may or may not do for other things, but surely do for their lost AirPod. Now each and everything comes with one disadvantage or the other and these wireless creation of apple is no exception to it!

And so, to spare no one around him, one interesting artist has decided to play a prank on AirPod users by making hyper-realistic AirPod stickers and sticking them around his hometown- San Francisco. And to find these ‘difficult-to-find’ earphones, as the truth has it, will make anyone bend down and try to pick them up. Similar to the evergreen spoof of gluing coins to the ground, but only for kidos, because who on Earth, or at least in such countries, carries cash now? That’s a thing of the past!

Pablo Rochat, an Artist and digital creative, came up with a little devilish, yet a funny idea of laying this bed of stickers all around San Francisco, because – though he’s yet to lose one of his own AirPods , which he tends to drop all the time. It’s we who can know each other, after all.

In an interview he explained, “I have often seen many people drop their AirPods, so the ticklish side of mine decided to make fool out of everyone and to make it look like as if they are dropping their AirPods around the city and to see those fooled by this to pick them up. Now here’s the fun part. I love putting AirPod stickers on the floor and hide behind something to see people try to pick them up. Some people laugh it off with me, but a few have been angry that they were pranked. Now that’s their take on it!”

Made life-size AirPod stickers and stuck them on the ground, all over the city 🤡

Generously (to allow you to have some fun as well), Pablo also shared his template for the AirPod stickers, which means now anyone can print their own stickers and stick them on the ground and wait for strangers, colleagues or a dear fellow to fall prey to it.

Or, if you can get more crazier than this, then you can print them off and stick them all over your own head, so you can finally feel like one of those wacky guys who walk around all day wearing AirPods, whether you’re listening to music or not, or irrespective of the fact whatever you are doing.