Though Christmas is all about enjoying yourselves and having delicious food. But parents are exhausted by having their hyperactive kids at home and children dread the reports given by Elf on the Shelf for their bad deeds. Well, the schools started but there was no relief for the students since their principle dressed up as Elf on the Shelf to report the bad deeds. 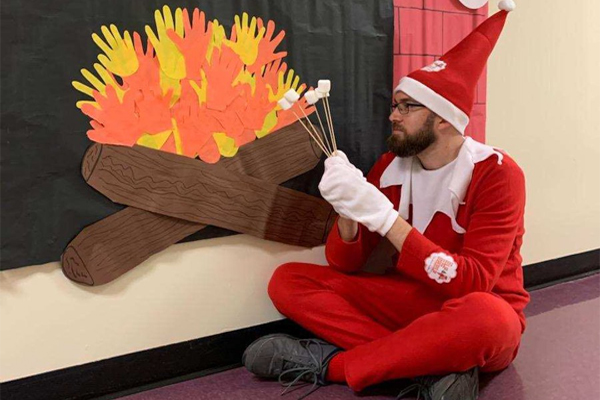 Well, parents are overjoyed because the holidays are over and now they can go back to their routines without worrying about their kids for at least half of the day. Also, they can keep Elf on the Shelf back in their storage rooms. Somewhat kids are also relieved that they do not have to be on their best behavior because of the Elf on the Shelf.

But the principle of Kensington Elementary in Waxhaw, North Carolina had something else in his mind for his students. They were informed before their Winter Break that the principle of their school, Terry Vaughn will be dressing up as Elf on the Shelf for the school’s Character Day. But there was something that the students didn’t know about his reason for this getup.

Not only he dressed up as Elf on the Shelf but also hid around the school just like his character to keep an eye on the behavior of the students of his school. Students believing in Santa are already scared of the North Pole spy reporting their every deed to the Santa. Now they have to worry about their school principle as well.

Well, it was not that bad for the students as their principle was quite hilarious with the acts up his sleeve. Principle Vaughn dressed up as Elf on the Shelf was quite hilarious as he was dressed up as an elf from head to toe in a funny costume. The costume was ridiculous but somewhat convincing but was able to make children happy. Principle Vaughn was quite content with that fact only.

He left no stone unturned to make sure that the students of his school make memorable and good memories of the day and have a great start after their Winter Break. Union County Schools shared some pictures of the same with the caption, “This is how you spread holiday cheer! Great job Principal Terry Vaughn @KensingtonES_NC @AGHoulihan #elfontheshelf.” Others replied and commented on it. People ever re-tweeted and said, “What a wonderful thing for him to do! Those kids are going to tell everyone on Christmas Day about this and will remember it their whole life!”

Others wrote, “This is the kind of Principal I would like to work with…I can see the leadership, heart, and charisma from here” and “Wow— I love it! This man is doing the work he’s supposed to do. <3” People are parents all over were happy about the efforts the principle and the school was made to ensure that the students of the school have good and memorable school days.

Every school management and the principle has a different vision to make sure that the students of their school have a good school life in which they are not only happy, learn new things and explore themselves but also feel safe and at home.