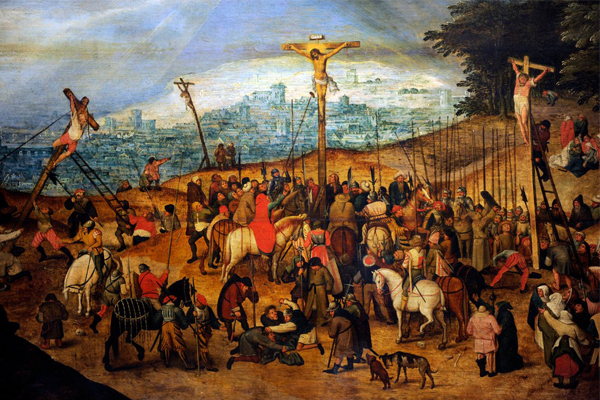 The thieves who had stolen “The Crucifixion” a painting by the Flemish artist Pieter Brueghel the Younger, decided to enter the church at lunchtime. They knew that the parish priest must be out and they took advantage of the situation. The thieves didn’t waste a moment to enter the church and smashed the showcase with a hammer that was protecting the 17th-century work. They left the church and sped out of the town in a white Peugeot, according to an Italian news media reports. The car caught an eye of a nearby resident who also noticed that the door of the church was wide open, which was unusual. He raised an alarm immediately.

However, the thieves didn’t know that the piece of art they had stolen was just a copy of the original artwork. Carabinieri, Italy’s military police had asked the church to do so as they had received some information that the burglars had their sight set on the art of Brueghel.

Besides the Carabinieri, only the priest of the church and the local mayor knew about the substitution. Hours after the theft all of them pretended to be stressed and in grief over the loss. Daniele Montebello, the mayor of Castelnuovo Magra, the town in Liguria said that “We had sworn to the carabinieri to keep mum, so at first I had to act like I was desperate and fake grief over the loss.”

Now he fears that he would be forced to limit the access to the church. The church sure has a closed circuit camera system and an alarm but it is feared that may be the alarm went off.

The operation was successful and the mayor praised the Carabinieri for the quick action. The news of painting being a copy was later leaked in the media. The priest of the church The Rev. Alessandro Chiantaretto believes that they must have kept a tab on his activities before executing the theft.

As the investigation is still under process, the Carabinieri refused to comment. Also, Mr. Montebello said that he didn’t know whether the thieves had been identified or not and the Carabinieri had told him that it was “only a matter of time”.