Dads love a good laugh especially when it comes at the cost of scaring the hell out of their naïve families. To be honest, my dad’s not really a trickster, that thing involves too much of plotting and planning but yeah sarcasm is what he chooses, unlike this dad who faked an entire emergency to prank his family. 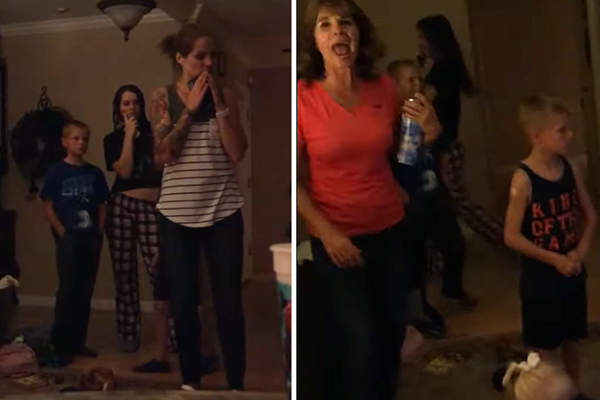 And even though sarcasm works just fine every time with my little ones, I had no idea things could take a turn into this direction, so as the story goes this dad staged a complete nuclear emergency from step one to stage panic and run. Where most of the pranks dads do are harmless this one certainly was not very thoughtful, and as the dad watched his family paralyze in terror he made sure to record every single reaction they gave.

The prank began when he convinced them that World War 3 was about to begin and that they need to vacate their homes and go into hiding as the family is scattered around the room minding their business. All is good when suddenly the television programming is interrupted by bizarre alarm tones followed by an announcement that three nuclear missiles have been fired by North Korea and will reach areas of Chicago, Illinois, New York, New York City, Los Angeles, and California within three-three and half hours. These fake missiles were said to destroy the areas within 400 kilometers of the mentioned locations.

The false announcement also instructs the family members to gather their basic survival kit and look for a safe place to run to. The family stands there in complete disbelief and horror and one of the women even goes onto curse North Korea. All of their faces turn pale which is where the dad who was silently recording everything is no longer able to hold himself from laughing, of course, none of the other members seemed to have enjoyed it other than another family member who was a part of the planning.

To be honest, I doubt if this prank qualifies as a funny situation since it was a bit too much of a stress giver and the only person laughing is the pranksters and not a single soul apart from them, maybe the two shall have to look for the nearest fallout shelter now!

Thankfully the kids in the house did not understand what was going on else the effects would have been catastrophic. So maybe someone will be heading to the shelter tonight, right daddy?