What would you expect a six-month-old baby doing? Learning to walk on all fours or maybe talking. But surprisingly, a six-month-old boy has been learning water skiing. Rich Humpherys, son of Mindi, 33, and Casey, 36has broken the world record for the youngest person to water ski. 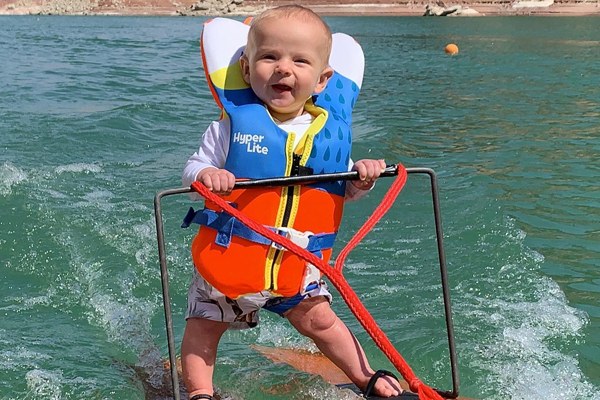 Aged just six months and four days, Rich’s water-skiing session saw him beat the world record by 23 days. A video of Rich gliding across Lake Powell, Utah was posted by his parents on social media platform, where it quickly went viral. The video got mixed reaction from people. Some people were amazed by the achievement of Rich, while some thought it was a dangerous act for Rich. Commenters on social media commented that the baby was too young to be water skiing.

The proud parents revealed that they signed their boy up for infant swimming lessons before allowing him to try water skiing to ensure that he was totally safe and sound. They also got a special training board made for him. They gave him enough time to get accustomed to the board indoors by strapping him in and pulling him around on the floor. By the time he water skied on the lake, he seemed comfortable, calm and happy.

The parents chimed in that they consulted his pediatrician and before he water skied, he was super impressed with how far along Rich is. The family says they took a number of precautions to keep Rich safe, including strapping him into a life vest and having him hold onto a big handle. Dad Casey explained that they grew up with water sports and were aware of the record that had been set prior, so when he started pulling himself up on the furniture, they both decided to start him young.

The family hit back at the suggestion that their son was ever at risk while out on the water, revealing that they had a boat of 12 people – including doctors – on-hand in case of an emergency and the boat was going just 5 miles per hour. Rich had a life vest on and in this situation, Casey was able to keep him at arm’s length and the camera angle doesn’t show that as much but he was kept very safe.

He went on explaining that the little skis he made for Rich so if he had slipped out of it and Casey had not caught him, the skis would have kept him [strapped] in and he would have floated with his life jacket. Some people chimed in to defend them as well, praising the couple for fostering the little guy’s love of water at such a young age.

The couple was unfazed by the criticism, telling that they actually appreciated the concern from commenters and wanting best for their son. There may be a spirited debate in the comments, but one thing’s for sure: This little guy was born to be on the water!