Fancy dress competitions are one of the fondest memories of our early school life. The different themes such events introduce are fascinating and urge one to let their creative juices flow. For this exact reason, a Florida family is receiving all limelight after the mother rethought the ‘career day’ theme and sent her kids in a complete Greek life garb. 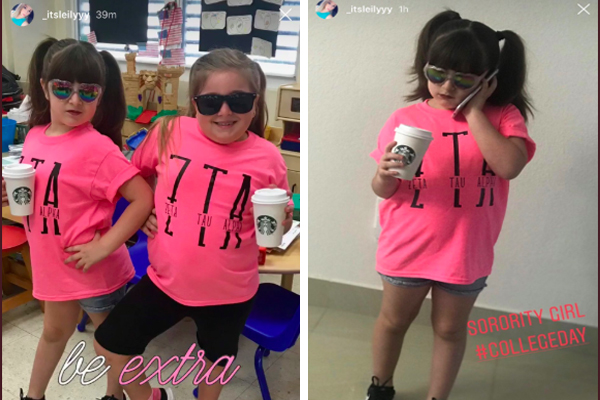 The funny pictures were uploaded to social media by one of the little girls’ aunts, who mentioned that her sister sort of misunderstood the whole theme of the assignment. As per the Twitter user @Seilynx3, the plot required her niece to be dressed in college gear such as a university jersey, Gator’s hat, etc but that is not how she ended up dressing her kids as.

Their aunt wrote that her baby niece had a dress-up day themed, ‘College Days at School’ and with what these girls looked like, she does not think that her sister understood the whole idea so nicely. She dressed them up as frat boy and sorority girls. Jennifer Gotor (the mother of one of the girls’) said that the theme of the event was ‘career day’ where they had to dress up in the colors of their dream profession or something related to their dream university.

My niece had college day at school today and I don’t think my sister understood that she had to dress her up with college gear… instead she dressed her and her friends as a sorority girl and frat boy lmaoooooooo pic.twitter.com/e6OZohhjCe

However, the idea of dressing these girls as sorority sisters was initially given by their teacher and since they all loved the idea they went ahead with it. And let us not disagree that the costumes were beautifully designed to match the typical Greek students’ life. The girls’ outfit matched the Zeta Tau Alpha sorority’s uniform and was perfectly matched with the Starbucks takeaway cups that they held in their hands, a mobile and cute sunglasses.

Their boy pal came dressed in a University of Florida tee and a FRAT hat along with a red solo cups pair. The post has gone viral and people are cracking up at these tiny sorority ladies. Their post has received more than twenty thousand likes. One user and a ZTA member commented that these girls were the cutest members of their fraternity and that she was proud to be their fellow sister. While another person wrote that he was amazed at the beautiful idea because kids of this age couldn’t have any college gear.