A couple had been experiencing the weirdest situation of a year when the wishes, “Happy birthday to you, May God bless you!” and “Jingle bells, Jingle bells! Merry Christmas!” get tuned together on the same day. It would definitely result in mixed feelings and definitely a lot of excitement. 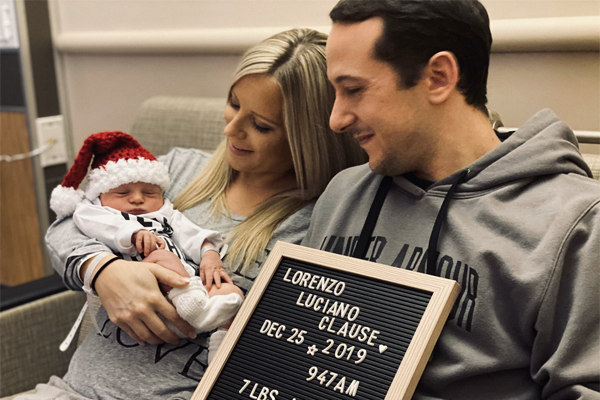 Birthday is the sweetest and the most awaited day of the year filled with frolic and frizzles.
Likewise, Christmas is one of the special occasions full of angelic and religious vibes. Every corner of the world is decorated beautifully on Christmas eve accompanied by celebrations and exchanging gifts.

Mr. and Mrs. Clause considered this blessing as a boon while some people felt this as a bane being born on Christmas Day. They found it really weird and got confused. They wondered if they had to get excited for their birthday presents and greetings or for the Christmas jingling. They were confused as to what should be celebrated first, Christmas or Birthday! For which occasion should be the wishes sent first! Hence, the day of 25th December became different for such people in a really different sense. One of the couples in the United States of America was blessed with an adorable baby boy on Christmas Day. They shared their happiness with their fellows on Twitter.

Mr. and Mrs. Clause wondered how come did the baby boy arrive eight days earlier on the day of Christmas as he wasn’t originally supposed to be a Christmas baby. Therefore, they related this beautiful gift of Christmas to the ancient stories of Santa coming to every doorstep leaving behind him a bunch of gifts for the children. Hence, they called it a modern version of Santa Times where their young boy would save the Santa from something nefarious with the help of his group of friends.

The miraculous Christmas brought the baby boy, Lorenzo, successfully delivered by Amanda (Mandy) Clause via a natural delivery method. Her husband was so overwhelmed that he wanted to share this news with the people. Thus, he posted the family picture along with a morning wish to America. He called his little baby a true Christmas miracle that happened in their lives and that he had received the best Christmas gift ever. He even told that the nurses in the hospital were even more curious and excited to name the baby boy and suggested some names such as “Nick” or “Buddy”. However, he found these names a bit weird and was just satisfied by calling the baby “Clause baby” at that time.

The UPMC news too shared the adorable picture of Mr. and Mrs. Clause with their newborn stating how the miracle happened in their lives in the foggy Christmas Day at UPMC horizon eight days earlier on December 25 at 9:47 A.M. The baby was named Lorenzo Luciano Clause, 7 lbs. 11 oz.

The couple was even glad to see the messages on Twitter where people congratulated them for entering the parenthood. Some of the users on Twitter admired the glow of love and happiness on Amanda’s face while some of the others were happy to hear that they didn’t allow their child to be named with weird names such as Nicholas. Most of the people admired the beautiful child and presented wonderful and warm wishes to the family.