A mother named Shaketha McGregor took up a unique way to make her ever-demanding kids know the value of money. She ended up holding an interview. The interview aimed to recruit her kids for various jobs. Her idea received an overwhelming response from social media users. 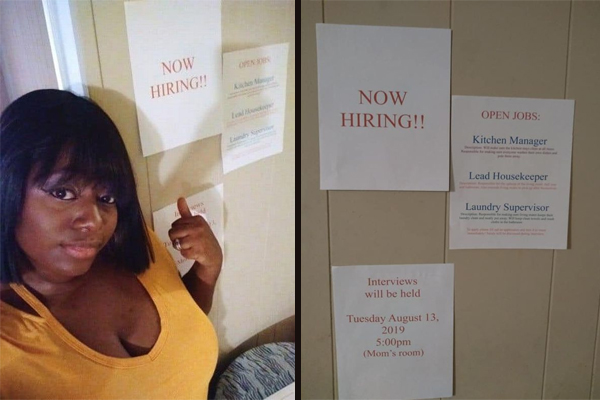 With our world getting stuffed with luxuries, the desires and cravings of man are soaring up day by day. Not just adults but kids are too walking the trend. A mother named Shaketha McGregor was going through the same phase as her kids were coming up with more and more demands.

Days were getting harder for Shaketha as her kids came up popping sumptuous demands like a new cell phone, an allowance, visits, etc. to her. She was struggling to keep pace with that pressure. But it breached her patience level. So finally, she broke it to her kids that she had looked up to their demands. She told them that she would have a surprise for them that day when they got home from school.

On hearing that, the kids might have bubbled up with joy. But Shaketha had something else in her mind. When kids returned home, they were shocked to see the surprise of the mother. There were notices put up on the wall that announced that she was conducting an event to hire them as a Kitchen Manager, Lead Housekeeper and Laundry Supervisor.

If interested, the kids could apply and appear for an interview on 13th August 2019 in her room at 5 in the evening. The mother christened her initiative as “This Mom Means Business Inc.”. Not just the advertisement but she also got an application form printed for her kids to fill up if they wanted to apply for the listed posts.

It was similar to the one that applicants would find in the process of recruitment. It asked the applicants to specify their details. Then there was a section that dealt with their previous experience at home or school. It also inquired if they wanted to work some nights and weekends. The children could also mention their desired salary.

She took the winds of her initiative to her Facebook page. She narrated the entire story that coerced her to go for the event. Shaketha shared that it was a whole iring. If they wanted it then they needed to work for it and earn it. She brought out one more surprise element that she also had an in-home credit unit.

The witty mother shared a picture that shed light on her credit unit. It said, “Let Mom start you off with a line of credit to help build your allowance as well as character!”

The parents could not rein in themselves from expressing their joy on seeing that. They were in love with her idea. As a result, her post received around 123,000 shares and garnered 200,000 likes. One of the thrilled social media users said that he/she freaking loved her for that. There was also a soul who labeled it as an “awesome idea”. Another soul said that it was the best thing. That person described her as a creative mother.

Hopefully, the little nuggets would have discovered the value of hard-earned money and put a brake on their piling demands.