A lazy-guy came up with one of the most creative solutions to help him sitting in his backyard and not move around to get a drink. He converted his lawnmower into a moving bartender and could then mow his grass and get a drink (of any kind) any time. 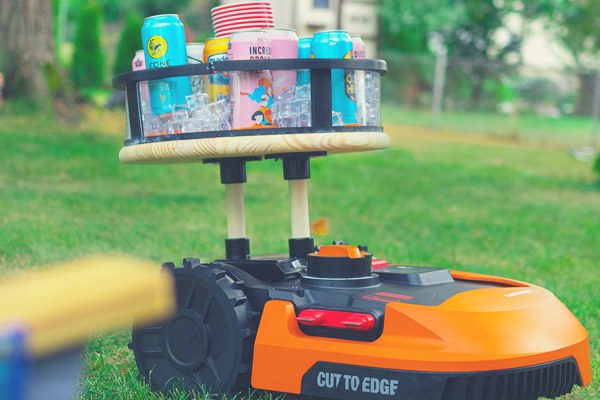 This awesome lawnmower-cum-bartender was invented by Matt Benedetto. He named his crazy invention as MowTender. Benedetto, while describing his invention on his website said it combines the ease of an automated robotic lawnmower and gives the uses of a bartender. Further, he said that one could enjoy their Sunday chores on a whole new level with the most productive beer delivery system ever. In short, the MowTender could hit two targets with one shot.

It wasn’t very hard for Benedetto to come up with a great idea. It was his Landroid, a cordless robotic lawnmower that gave him the hint to join the pieces for the puzzle. Hence, came the idea of MowTender.

Now, if for a moment one could imagine themselves with this awesome product and could think about the time they could save by using the MowTender to serve drinks to the guests or not having to walk back and forth for them, it’s just an amazing scenario. Or enjoy chilled water in your backyard without going through the trouble of getting it or having to ask someone to get it for you.

Further, he said that projects like this are just for fun and to poke the real products available for sale in the market. Benedetto’s product could have helped the lazy people (we included) in doing some chores. Unfortunately, Benedetto decided against the benefit of lazy people.

There is a saying that a lazy man finds the best solution because he/she wants to finish the given task with minimal effort. These save time and money. Benedetto’s nature of being a lazy person brought him the idea of MowTender and, the end product was a solution to a problem that could only be seen by a few.

Cheers to lazy people and their crazy ideas that pay off!