A 25-year-old cabin crew member, Henry Kehr ran 13 miles inside an aircraft, which was 36000 feet above the ground. He struggled with irregular atmospheric conditions so that he could finish the semi-marathon. He accomplished his goal while he was on a vacant cargo flight which traveled for eight hours from Atlanta to London Heathrow. 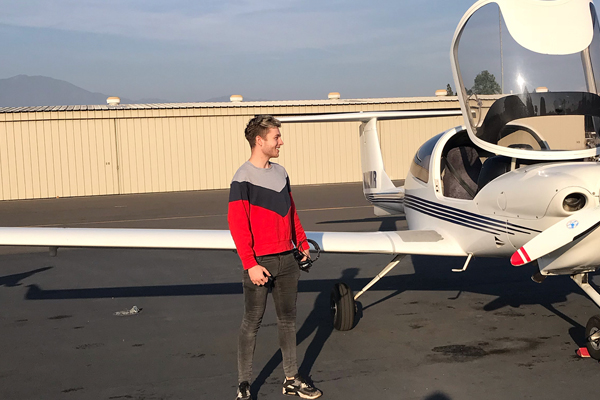 This eccentric idea came to him when he realized that a lot of charity proceedings have been canceled due to the coronavirus pandemic which harmed the needy people. He was inspired by some of his colleagues to take up this insane challenge. He also thought it would contribute to the good of the aviation industry which has been badly affected by Covid-19.

It took Henry two hours and thirty-seven minutes to accomplish the run which fetched him more than £1,000 ($1,300). He dedicated this achievement to his mother, Tracey, who lost her life two years ago due to breast cancer. The memory of his mother made the challenge heart-rending for him. He was galvanized by his mother, who was also an ex- cabin crew member.

*UPDATE* Due to health and safety limitations of being up in the sky I have been advised that a half marathon is the maximum distance I'm allowed to complete due to being up in the air and the safety of everyone on board. Something a bit crazy and positive to take our mind off these difficult times! This year has been hugely difficult for everyone, especially those in the aviation industry, the impact of COVID has been devastating in many ways. It has had a huge knock on effect on the support of many incredible charities with a lack of fundraising events so I thought I would try and raise some money for a few charities close to me. My incredible inspirational Mum passed away 2 years ago from cancer which changed my life forever. She was cabin crew years before bringing me into the world and by undertaking this challenge I will be flying high with her every step of the way. A few of my amazing colleagues have inspired me to partake in this insane challenge. My passion for health, wellbeing and fitness has been a huge part of my life and now it is more important than ever. I have run many different races in the past including marathons but nothing quite as crazy as this. Out of pure gratitude for what our mind and body can achieve with strength and determination I am challenging myself to complete an ultra marathon in a cabin pressurised to around 6000 feet on an aircraft for an 11 hour flight. From take off out of Beijing to landing back into London Heathrow. Moving non stop on a mountain for 11 hours how hard can it be right? Il be doing this on the 13th July dedicating it to my amazing Mum, my fabulous colleagues and everyone who has been affected by this COVID crisis! All donations will be much appreciated (LINK IN BIO), so much love to everyone, I can't thank you enough for your support! Hope to see you on a flight very soon x @virginatlantic @virginholidays @macmillancancer #WEcharity #macmillancancersupport #ultramarathon #challenge #flying #wings #beijing #london #virginatlantic #virginholidays

He felt the support of his mother every moment while he was performing the challenge. He granted half of the money which he collected to Macmillan to help the cancer patients. The committed person made sure to abide by the social distancing norms. He finished his distinctive marathon up in the sky so that he could contribute to charity.

It was for the first time he tried something as crazy as this, though he has run many marathons in the past. He agreed that not everyone has the will power to run up in the sky. It takes a lot to get out of the seat and run 36000 feet above the ground. He purposed that people can do other things to support charities like host a coffee morning or something.

Charity organizations are doing their best to stimulate people to participate in events to help cancer patients.

The fundraising manager Emma Strokes-Heley said, “Demand for our cancer support services is greater than ever, but, due to coronavirus, we are facing a significant drop in our income.” She conveyed that people like Henry, who put in so much time and energy for fundraising are so essential for the society and Macmillan will forever be appreciative of their efforts.

She said, “Donations are vital to enable us to continue to be there for people living with cancer.” She urges people to show support to fight cancer during the pandemic.