A man named Edi Okoro went ahead for an elaborated proposal for a month without having his girlfriend-Cally get to know about it. He kept on clicking her pictures with the ring behind her back. Finally, he popped up the question. To his delight, she responded with a big yes. 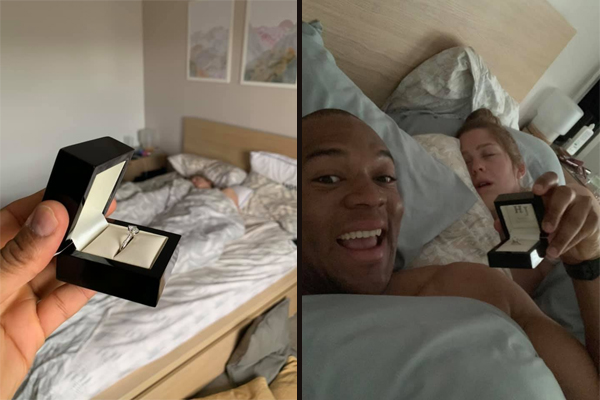 Proposals are no more limited to the magical question. The way of presenting the question also adds value to the golden moment for the couple. All the parties, events, flowers, etc. that facilitate a proposal seemed to be things of past when a video of a man named Edi secretly proposing his girlfriend-Cally for a month surfaced in the social media world.

Edi was all sure about his girlfriend-Cally. The 30-year-old man wanted to take their relationship to the next level. But he did not want to rush around and present a simple proposal. So the Herefordshire (England) resident went around purchasing a shiny diamond ring for their golden moment. He decided to have his time and collect some memorable moments until then for them to cherish for the rest of their lives. Then the idea of sneaking proposals came to his mind.

The creative man started clicking some hilarious pictures of his girlfriend by placing the ring around her. To his relief, she did not get to know it.

Not just that, he took the things a notch higher as he placed it in front of her when she was without her glasses. He grabbed that moment as he knew that she would not see it without her glasses. What a clever man he is! In the end, he put those pictures in an album named ‘how I proposed to Cally’ and posted it on his Facebook page.

He shared that those who had gone through that, they wanted to propose in a way that spoke to them as a person and couple. According to him, some planned a flash mob, a fancy meal or even arrange a marry me sign. He could not do that because “Edi doesn’t plan”. He described himself as a spontaneous improviser.

Taking on his spree, he said that the idea had been to take as many photos, in more daring scenarios, until he had found the perfect moment to propose. But if he would get caught before then he would propose to her at that moment.

Finally, the hide and seek play with the ring got over after a month. Edi popped up the question. To his delight, Cally responded with a big yes. He shared the great news with a picture of her wearing the diamond ring. He said that they had ended up engaged and he had not got caught.

But to the dismay of the followers of the story, he did not reveal the last moments of his proposal saga. He said that it was a story for another time and asked the followers to stay tuned.

The social media users responded with a bang. They gave thousands of likes to the post and longed to explore the last part of the sneaking story.

Hopefully, the man would turn up with his part and provide some soothing pearls to the followers.