Man sets the bar too high for others while proposing to his girlfriend. He proposes to his girlfriend with not one or two but with six diamond rings. Setting the example of a perfect proposal the man outdone himself and has left no room for perfection. 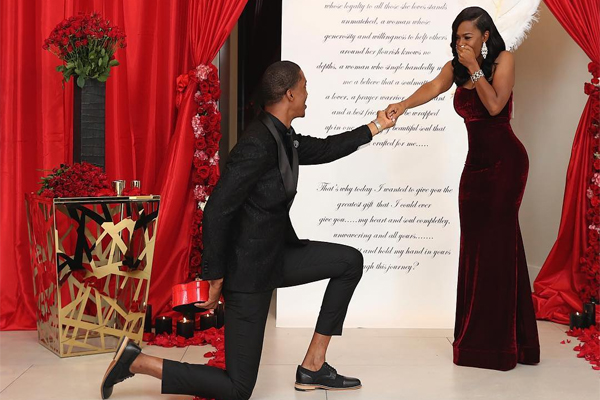 Dennis Brown II, a fitness enthusiast, and a model planned a proposal for his girlfriend and it was the perfect proposal one could ask for. Not only the decorations and ambiance were perfect but the proposal ring was the best. A proposal is made perfect by the perfect ring; a guy has to pick a ring which his girl would love.

A ring that would make his girl jump and cry on the spot. Most of the proposals are ruined because a guy is not able to pick a ring which his girl loves. But Dennis made no mistake while choosing his ring. He did not buy one or two but six diamond rings for his girl Atara Dallas to pick one.

And that is exactly what she did, she chose the teardrop ring for herself out of the six rings he used to propose her. Well, this is just the beginning of his perfect proposal. Other than this he hired an event planner, stylist, photographer, clothing designer, and a florist so that he could give his girl the most romantic proposal.

Also, he wanted that everything should be perfect and go smoothly when he pops the question to his girlfriend. Thus, all the arrangements. He also got a big banner printed which had all his feelings and emotions printed on it. Every line held meaning to it. Each line showed how much love, trust, loyalty, compassion and respect they have for each other. The banner expressed their journey in the most beautiful words anyone could write.

We are in engagement season. This proposal from this weekend was amazing. Planned to perfection by Khia at @themeit_inc … we look forward to working with them on many more amazing proposals during this engagement season. Fellas if you need help planning the perfect proposal check em out! Can’t wait to share more from this amazing day!

The proposal went viral way too quickly and the comments were so cute. The banner said, “Today, on your special day I had the pleasure of putting a smile on your face all day. For there is no greater gift that I could think to give you.”

“A woman, whose heart is full of love and devotion to me, a woman whose loyalty to all those she loves stands unmatched, a woman whose generosity and willingness to help others around her flourish knows no depths.

“A woman who single-handedly made me believe that a soulmate, a lover, a prayer warrior, a confidant and a best friend could be wrapped up in one amazingly beautiful soul that was handcrafted for me.”

“That’s why today I wanted to give you the greatest gift that I could ever give you……my heart and soul completely, unwavering and all yours……will you accept and hold my hand in yours through this journey?”