John Clark is a huge Adidas fan who owns about 150 pairs of trainers. He managed to create a whole man cave in the form Adidas shoebox wherein he built a cozy pub just before lockdown 2.0. He added a cute table, a mini TV and a fridge, wooden flooring, and a small bar inside the pub. 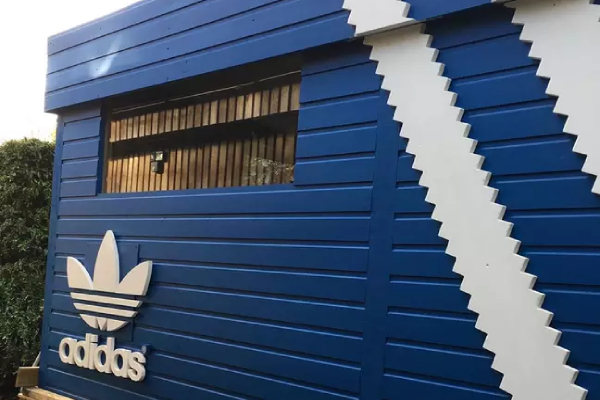 He loved Adidas so much that if the guy got a chance to share his name with an international footwear brand, it wouldn’t be C&J International Ltd that is Clarks. His 151st shoebox wasn’t just a shoebox from Adidas but it was his very own garden boozer that he built. This 50-year-old man loved Adidas so much that he chose their shoebox as the design for his mini garden pub.

The inspiration behind the first Adidas Originals shoebox shed pub in Stockport came in lockdown only when John could not go to the pub. This shed was built in the garden where once laid a children’s playhouse for their kids. The kids had turned 20 or 22 now. They decided to build their own pub since they could not go out due to lockdown. They started building one and it was finished just in time. Soon after, lockdown 2.0 started.

John got a local contractor who specializes in making mini garden bars. The idea was to make a mini bar which would be grey in color. It was supposed to be stuck in the corner just outside the house in the garden. When their contractor drew the layout, it looked like a shoebox and that’s when it hit John, why not make it one. The kids and John out in their own hours to help the contractor finish the shoebox shed.

The shoebox cost John £5,000 roughly, plus an additional £700 for the fit-out. Let alone the cost, John also put in several hours a day for the bar to look like it finally does. Him being a huge Adidas fan, he matched the blue used in the shed exactly to the one the brand uses for their original shoe boxes. He did the stripes, label and lettering in the front himself.

It was a tricky task doing the stripes. It was all made out of wood. He had to cut the zigzags himself and he did it so accurately that he matched each zigzag with that on the Adidas Originals shoe box. There was a cut in the upper part which he had to do it correctly keeping in mind the exact angle that the box has. He did everything as per the scale except the label. The label had to be bigger but he couldn’t manage to get a printer big enough for such a huge template.

John is so fascinated by Adidas trainers because he was a football fanatic back in his days. It was all about flashy trainers because of the football culture which he followed religiously back in the 80s. As a child, he could not afford all those gorgeous trainers he wanted. Now, the kids had grown up and he could fulfill his passion so he decided to go for it. He started collecting trainers about 10 years ago. He says it was his hobby to collect trainers.