It is not easy to find the right person with whom you can spend your life. Sometimes it is even difficult to find a person whom you want to go on a date with. But Mark has found just the way to attract people, he put up a billboard to advertise himself and got more than 120 applications because of it. 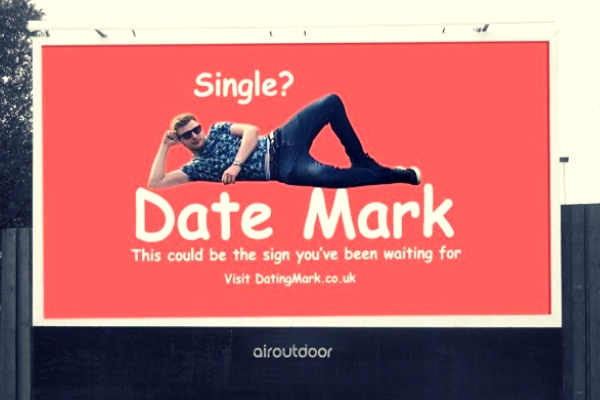 Mark Rafe, 30-years-old from Sheffield is single for more than a year now while all his friends are getting married. He is in desperate need of a love life while his Tinder account has not helped him much he has his genius plan to solve the problem. Instead of working on his Tinder profile he put up his advertisement on a billboard costing him £425.

He bought a 3m high and 6m wide billboard for £425 which advertises his qualities and him. In less than 24 hours he has received 124 applications. The billboard says ‘Single? Date Mark. This could be the sign you’ve been waiting for.’ It features a picture of him lounging on his side. His idea of the billboard was to make him stand out from the crowd and it has worked so far.

Mark who is 6ft tall shared “I’ve had more than 100 people get in touch. Unfortunately, half are men but I’m still very flattered. ‘I’ve been single for a little while now, and many of my friends are married or in long term relationships. I’ve tried the dating apps, but they just weren’t working for me, so I decided to try something a little bit different to try and stand out.”

His ideal woman is Maya Jama but it is not easy to find himself one. More than 462,000 drivers saw the billboard that was put up in the center of Manchester last week. The idea and motive of placing the billboard in Manchester were to attract the crowd since it is one of the largest cities in the UK with the highest footfall.

Mark works in marketing and claims that his campaign for himself is legitimate. He jokes that he has kissed three women in his life well seeing the desperate measures he is taking it does not seem like a joke at all. He describes himself as handsome and modest on the website he has launched for himself where the applicants can get in touch with him.

He added: “If at first you don’t succeed, buy more billboards?” Well, Mark is very optimistic that Bumble, Tinder and other applications will not help him out but his idea of billboards and own applications is the only way that he can see some improvement in his love life. Well, at least the man doing something for his love life and is optimistic about it. I hope the Manchester billboard is enough for him if not then we hope he can raise enough funds for more billboards.