We are all aware of the fact of how one would react with an encounter with a mouse. One might probably try to grab that mouse and let some cat run lose to catch that mouse. But surprisingly, one man named Simon Dell did not leave any chance to grab the opportunity to take photographs of the mice by creating a wonderful and superficial home for them. 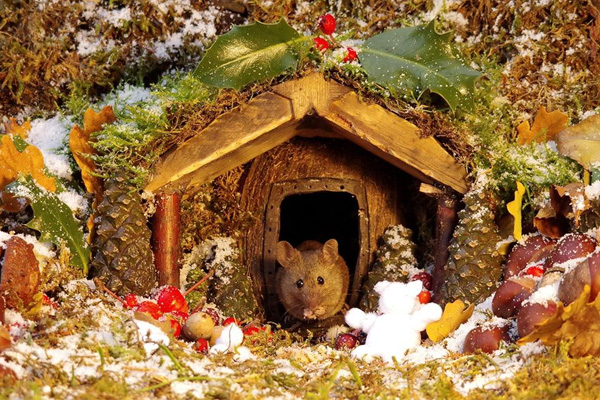 The outdoors is indeed mouse realm; however, it might be a little bit too close for our homes. This man is a wildlife photographer from Sheffield, United Kingdom. As soon as he saw some mice in his garden he did not find or stick to the options of getting rid of them as one would do. He made hay while the sun shone by clicking awes trucking photographs of the little creatures.

The obstacle that he faced was that the mice were not ready to come to him so he had to put efforts by enticing them in his direction. He ended up with building something that would draw their attention and he would successfully click awesome pictures.

Posted by George the Mouse in a log pile house on Sunday, November 17, 2019

And finally, it worked great. Simon Dell used his creative imaginations. He used old fruits and vegetables along with some props to build a tinny home for them. In order to get the pictures of them, he created minute houses for the mice named George and Mildred and their baby, Mini. He even built them a beautiful playground.

Simon would usually get their attention with some nuts and berries. He would pick the goodies on his walk on a nature preserve near his home in Sheffield. Interestingly, he prepared luxury banquets for the mice on the occasions. He also threw the light on how keen he is for interesting shots and photographs and often takes the photos of birds on the feeders in the garden. And one day he came across with a little mouse standing up in the grass.

Posted by George the Mouse in a log pile house on Friday, November 29, 2019

This kind man really got attached with this little mouse family. Now, he keeps updating his village regularly. Simon wanted to make sure that they were safe. He knew that there were cats just over the fence. Therefore, he thought of giving the mouse family a little more safety by collecting some logs and making them a log pile home.

The mice family now trusts Simon, and they know that he is no harm to them. He tells that his love for nature is unconditional and he does not mind staying with creatures like this. The mouse family was able to celebrate Christmas Eve this year right in the garden. Simon makes an awesome and cooperating landlord. He says that now that he has seen the house for a mouse family, he wished one for him.