Royalty is exclusive and charming. Fortunate are those born within the blue blood-line and commoners like us could only wish to know or witness what it actually feels like. A delicate set of expensive crockery, a bunch of people full of utmost sophistication, that’s mostly what most of us would have imagined a royal get-together to be. And while most of us have only been in a palace like setting in our fairytale like dreams, one man recently got to realise his hopes! 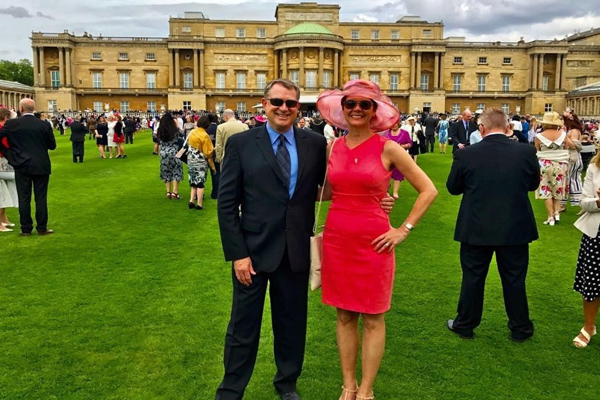 It was when 56-year-old Greg Agnew, a gentleman from Los Angeles discovered the burrow to the wonderland and secured an invitation to the royal garden party held annually. He visited the Buckingham Palace along with wife Nicole and savoured the sandwiches and other snacks whilst, enjoying a cup of hot tea alongside none other than the Queen, the Princes, the Duchesses and the entire royal breed.

The public tables on the lawn.

The palace and the garden which are usually closed to the ordinary audience, opens its arms to welcome citizens once a year, but the catch here is, how did Mr. Agnew, an otherwise nobody become a part of the soirée mostly attended by people sitting on the silver and golden sofa of the class system?

Greg, an ex journalist and current investor in technological giants like Google and Apple originally hails from New Zealand and it is this factor that permits him this privilege. According to sources, this is an absolute entitlement bestowed to the people holding a valid New Zealand passport, since the era of Queen Victoria. And so all this gentleman had to do was ask and the royal people happily obliged.

The real reason we're in London: We have been invited to attend Queen Elizabeth's garden party this afternoon with the Queen and Royal Family at Buckingham Palace. They gave us this extra card to frame.

They were also kind enough to send an extra copy for Greg and family to frame it. Apart from this, the only other section of people allowed this benefit, are the Australians. Coincidentally, the day also happened to be the birthday of Queen Elizabeth- II and Greg shared his ‘blue-blood feels’ experience with a series of Instagram photos, and he sure seems to have enjoyed every moment of it.