Undeniably, any age is the right age to do anything under the sun, come what may. There are so many things that we can do. When it comes to the fact that ‘age is no bar’, modelling is no exception! When an 84-year-old grandpa turns into a model, amazing things are bound to happen! 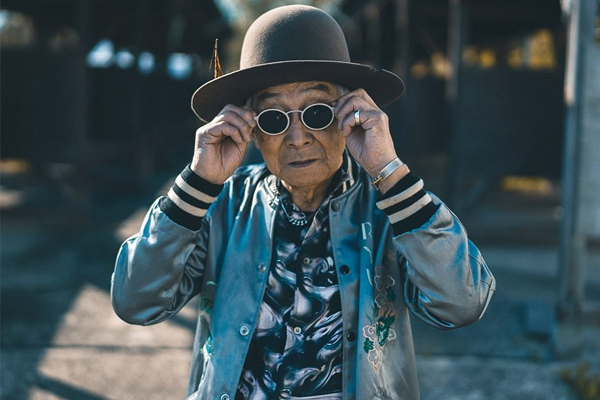 Tetsuya San, an 84-year-old retired chemistry teacher is indeed one of a kind! His life of a retired old man has taken a complete 360 degree turn and has transferred him to the ‘world of modelling’, as if this all were done just by the wave of a magic wand…

Tetsuya San’s profile is one top-notch profile which is definitely something to look out for in the big-wide world of Instagram. With no less than a million followers, this wacky fashionista grandpa has turned all eyes towards him!

From full-leather ensembles to meticulously layered looks, this younger-at-heart granddaddy has surely nailed it all. While such an avant-garde wardrobe isn’t usual for a 84-year-old to have, made such an empire of clothes in his cupboard, all thanks to his grandson. In fact, the garments aren’t his actually- the ownership of these garments belongs to his grandson- Naoya Kudo.

This all started when Naoya-his grandson, came home to Akita Prefecture for one week’s holiday. During his stay there, he decided to pass the time by playing the ‘’dressing-up game’ with his grandpa, who, to his surprise, was cooperative and happy enough to be a model.

“He was surprisingly enthusiastic about it,”. He gave a lot of suggestions about where to shoot and other things.” Kudo told Buzzfeed World. Out of many a location, “the chosen ones” were local beaches, fields, and the middle school where Tetsuya used to work in his teaching days.

When Tetsuya’s family saw him all decked up, they “went sassy.” The positive response they received was not limited to close relatives. In fact, in less than a month, Tetsuya had gained over 67,000 followers on Instagram—an accomplishment achieved, thanks to Kudo’s clothing, but now these ensembles are more of his grandpa now.

“It was quite a transformation to see my rural grandpa, who has no interest in fashion, in outfits he would never consider wearing on his own. However, things like my grandpa’s long johns and muscle pain patches he forgot to remove added a nice personal touch.”

Totally in the #trend feels, in his grandson’s trendiest clothes, 84-year-old Tetsuya proves that fashion can be fun at any age.