Since, the internet has come into play there has been a lot of things people have tried just to gain fame and popularity on the internet. People have been risking their lives, doing incredible and unthinkable things just to become famous or make a World record that would eventually make them famous. Similarly, this man has also attempted to do something that no one has ever tried or thought of. 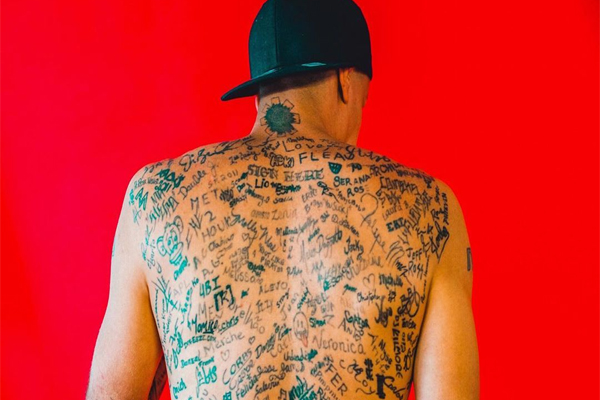 It is not easy to get your name in the Guinness Book of World Record. People have been trying for decades to even reach closer to the records. The World Record holders have earned these titles through hard work and perseverance.

Instagram star, Funky Matas is hoping to tattoo his way to the Guinness World Records. What’s crazy is that he is hoping to earn the record of most celebrities’ signatures tattooed on one’s back. So far, he has already got 225 famous names inked to his back.

The celebrities’ signature on his back includes comedian Jeff Ross, Will Smith, Chris Rock, Mike Tyson, Usain Bolt, Tara Reid, Gerard Butler and the man who voices of SpongeBob SquarePants and he hopes to get more and has been trying since.

He noted: “I was in between these two ideas: a survey like the ones Myspace had with questions and the answer parts in blank so people could personally fill them out with a sharpie or having my friends sign my back with an actual tattoo machine. I thought the second idea was more interesting and more fun. Since I am a tattoo artist, it wouldn’t be too difficult to set these occasions up.”

He continued: “As far as anyone trying to talk me out of it, most people already knew my wild lifestyle and the fact that I never let anything stand in my way. So, nobody really tried to prevent anything from happening. I’m pretty hard headed when it comes to things I want.”

Matas is already an influencer on Instagram and boasts over 309,000 followers on the microblogging site. Sharing his experience, he said: “A few people have turned me down because it probably wasn’t the right time. The man who played Chewbacca in the original Star Wars movies was very hesitant because he was afraid of how it would turn out.”

“Before anyone tattoos me, we usually talk about what is going to be done, but I have had to decline a few important people who wanted to sign my back.” Sharing the procedure. He is yet to hear from the Guinness Book of world Record Officials but plans to add a few more people just so as to set the highest record.