It has been a long time since the whole world has been put on lockdown due to the coronavirus outbreak. Social gatherings are avoided and people are not able to visit their favorite restaurants and pubs too. A resident of Essextook the matters in his own hands and converted his garden shed into a fully stocked pub. 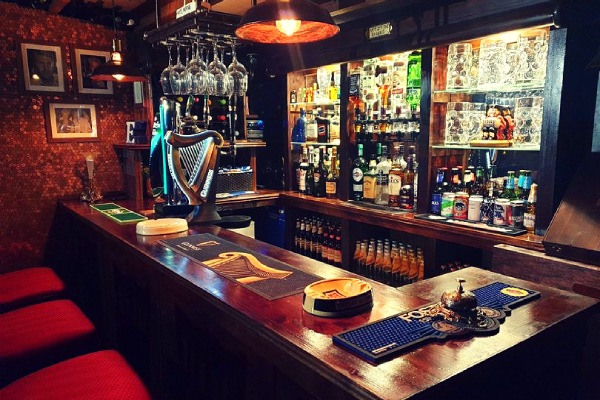 People are advised to maintain social distance and live in isolation. It seems like it has been a long time since anyone set a foot in their favorite restaurant and relaxed while having a beer. Well, being creative can help you not miss your favorite hangout spot. As it turned out, David Higby from Leigh-on-Sea spent the last 2 years converting his 20-feet garden shed into a pub. Fortunately, he was able to finish the remodeling just in time for lockdown.

David got the inspiration to build the pub from his partner’s parents. Amanda’s parents used to run a pub called The Mitre in Camden. After their demise, the 56-year-old David decided to pay them a tribute by re-creating the pub in their honor. David even tracked down the original pub sign used by them.He put in a lot of efforts to make it look like a real pub. The interiors of David’s pub were done with real bricks. He also stuck 22,000 pennies individually on one of the walls. That’s pretty amazing!

The creativity does not end here. To give the place a pub-like vibe, David placed some furniture and fittings which he purchased online from eBay and Facebook market place. David’s pub is fullystocked with all the beverages one could wish for. He also purchased draft pumps for the pub. To top it all, there are dart boards and even a karaoke machine to keep the couple entertained. David’s hard work and efforts just got completed in time. The family got a place for recreation, and they just can’t wait to show it off to their friends and relatives.

David said that when everything gets back to normal, he’ll definitely have the biggest party and everyone was welcomed to join them. Well, it’s not just David who had this creative idea to renovate his garden shed into a pub. Jayne Tapper, the mother of three kids, also converted her garden into a pub for a different reason.

Jaye Tapper’s husband, Paul, used to go out for drinks with his friends. To stop him from doing so, she recently converted her garden into a pub. Jayne decided to call her pub The Doghouse Inn. She said that it gave a whole new meaning to being in the dog house. Jayne has planned to host parties in her new pub and to also spend some chilled nights at home.

Jayne mentioned that her husband, Paul, loved to hang out in the local pubs. How much she tried, she could not keep him at home. It was then that Jayne thought to create her own pub which would allow her husband to stay at home. Jayne said that in this way she would be her own landlady and could also tell people that her husband was in the dog house.

Boy Turned Furious Upon Finding Out Twin Gets More Allowance

Mum Showed Her Lunch Packing Technique And Gets Criticized

Boy Turned Furious Upon Finding Out Twin Gets More Allowance

Mum Showed Her Lunch Packing Technique And Gets Criticized