Many people have had dogs and cats as their pet. But have you ever seen anyone with spiders or snakes as their pet? Believe it or not but a little girl shared her room with nearly 50 tarantulas. She had showed all her pets in an interview. This interview was indeed a very adorable one. 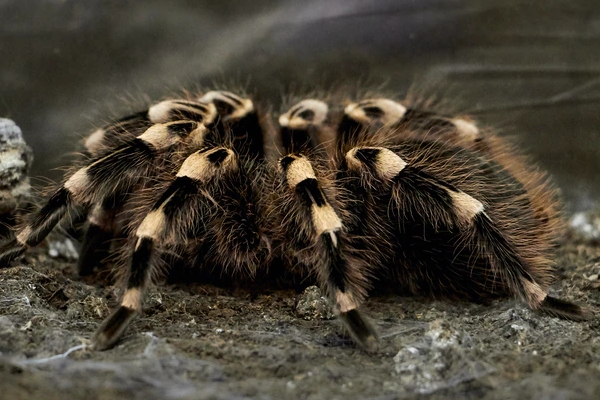 An eight-year-old girl Hollie Greenhalgh had given an interview where she had displayed her collection of creepy insects that include cockroaches, snails, scorpion, snakes and many other insects. She kept on talking to the hosts while she carefully dealt with all those creatures including a Chilean tarantula named Ruby.

Hollie told the hosts that she had started arguing with her mother Rachel for having a pet spider after she had seen an exhibition in a museum. That is how she got so many pets. But she often got confused and had faced difficulty to remember their names. She told that some of her pets had names, for naming a tarantula she needed to know the gender and had to wait for it to moult. The hosts then asked her that had she been bitten by any of those creatures. She replied to this by saying that Georgie had bitten her once and Lizzie had bitten her twice in a row. She then said that it had not hurt her as much as she was shocked.

Hollie’s mother Rachel told that it had been very fascinating but she was not a hundred per cent comfortable with all the pets. She told that she had seen Hollie with them and she loved all of them.

Hollie even had been running her own YouTube channel under the name Princess Sophie Pink. She had managed to make all her viewers believe that snakes and spiders were not at all scary. She told the hosts that her mission was to tell people that spiders and invertebrates were cute. She also told that her main mission was to meet David Attenborough. The hosts then said that they felt Hollie was fascinating and that they would surely look forward to when she would be the ‘next David Attenborough’.

The viewers went crazy after watching this interview. They had loved Hollie’s presence of mind. A viewer wrote that she found Hollie to be really very intelligent and passionate about her pets. Many other viewers commented by saying that they loved Hollie and wanted her to be even more famous. They also hoped for Hollie to meet David Attenborough very soon.