We all are big fans when it comes to heroes, superheroes and supernatural stuff. Everyone wants to experience what it feels to be in their world. They might be true or are just fictional or maybe can become true in some years. One woman claims to be such a huge fan of the supernatural that she got permanent vampire fangs. 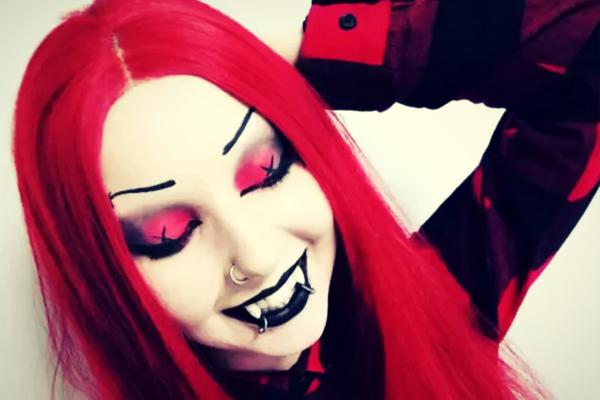 Julia Kumpulainen, from Kotka in Finland, is a huge fan of supernatural, mythical creatures. For years she has followed all the movies about the supernatural and all the content that is available on them. She also believes that she can smell the taste of blood and metal from a distance just like the vampires.

Among the supernatural, vampires are her favorite and she even likes the taste of the blood. Julia, who is 24-years-old shared that she was always fascinated by supernatural and even shares some of their traits. After the movies, she was so involved in the personality and characteristics of the supernatural. She has done all the research and read all about them through whatever was available.

But her dedication was true and in January 2019, she found herself a cosmetic dentist who was ready to give her a pair of permanent fangs. So that is what she did, she got her dentist to make her a specialized pair of vampire fangs that could be fitted in her jaw permanently. The whole procedure cost her more than £430 (€500).

But she was happy with her new permanent pair of fangs. Since then she has received a lot of attention from strangers. There are mixed comments when a person sees her. Some are afraid of her but some think that it is cool. Her 4-years-old, daughter Elli, thinks that her idea of permanent fangs is cool and love them.

She wants to change the perspective of people around her for the supernatural especially vampires. She believes that vampires are not bad like everyone thinks they are. They are not some blood-sucking creatures or animals but human beings just like the rest of us who are a little different from human beings. Though she loves the taste of blood, she won’t bite anyone.

She also shared that when she was younger she was different from all the other children around her. Though she gets a lot of stares and people tell her to grow up all the time she is not affected by them. Whenever she is at the bar people request her for pictures and ask whether or not she would bite them. Just like the vampires, she does not like to go out in the sun as she is very pale. But she believes that one should follow their heart and do whatever they want to do.