A couple in their early 80's got famous on Instagram for modeling in leftover clothes in their laundry. This elderly Taiwanese couple has been in the laundry business for over 70 years now. They have tons of abandoned clothes since they have started their business. 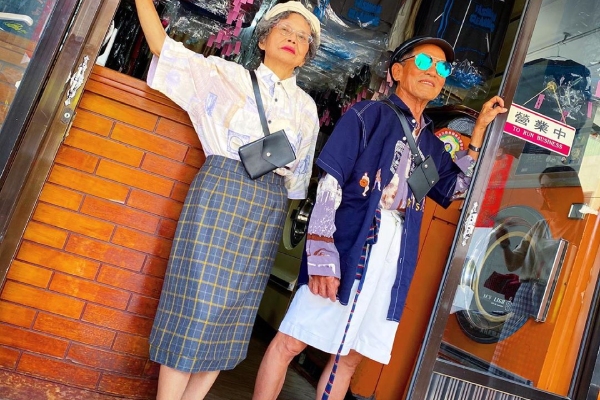 Chang Wan-ji and, his wife Hsu Hsiu-e being 83 and 84 respectively went viral for modeling the forgotten clothes they have been collecting. The couple is a proud owner of Wansho Laundry in Houli District of Taichung City. Chang Wan and Hsu Hsiu got married in 1959 and now have two sons, two daughters, and six grandchildren.

Wan-ji started by doing dry cleaning around the age of 14. He started working at a young age just to support his family.

Over the years the couple was left with a buttload of forgotten clothes. They tried to utilize the clothes while giving some of them to charities. The couple came forward to help and provide clothes in the time of natural disasters. Still, after giving most of them away they were left with a large number of clothes.

After seeing the massive amount of clothes just sitting and eating dust, their grandson came up with a great idea to utilize the mountain of garments. Reef Chang persuaded the couple with this innovative idea to keep his grandparent’s day occupied. Wan-ji business went slow due to the pandemic, case count in the country was around 458 and seven deaths.

Reef mentioned the business being dull and his grandparents would take a nap in the shop. After seeing this, Reef decided to help them and show them a way to use the pile of clothes. He wanted to show them that enjoyment in life should not stop even when people turn old.

This gave birth to their account WantShowAsYoung. Reef Chang was their designer and photographer. He decided the getup and the setup that made them look like a magazine’s model. Wan-ji felt 30 years younger after trying on clothes and showcasing them. Even Hsiu-e liked the way she looked in her new look.

Reef further mentioned how his grandparents weren’t able to catch up on the new fashion trends. They had been fashionable in their way in their time. The couple was unable to understand why the new generation fancied the vintage clothing style.

Reef was trying to help his grandparents in their old age as they did for him when he was young. Reef now wants to spend as much time he can as they are old now. The Instagram account has gained more than 232,000 followers, and the count didn’t stop there. Although it was created on 27 June, it got viral in such a small time. Even Hsiu-e mentioned that how creative her grandson was and how happy she was after modeling.

Reef was mesmerized seeing that people from all over the world were following their page. To this Wan-ji further added that how good clothes back in his time were a privilege. Even his suit that he got married in costed an ox-cart loaded with 20 bags of rice. Clothes were so valuable that you could pawn them in need of money.

Wan-ji told that there were many reasons for the clothes that were left in their shop; some people relocated, some passed away, and mainly a few forgot them. He added that this was a better way to use their time in the shop than watching TV and falling asleep.