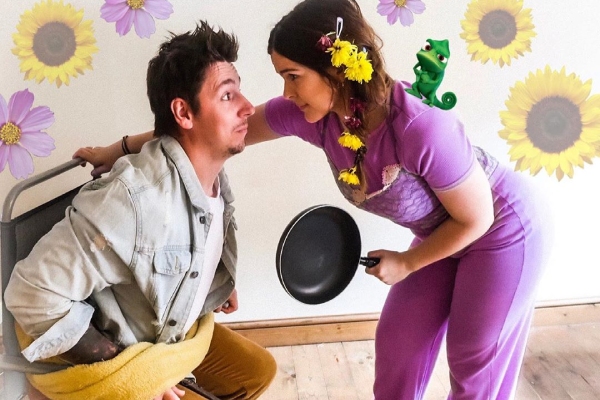 Social media influencers, Joey and Abby Tyers, brought Disney to their home. By dressing themselves up from the clothes of their wardrobe, they transformed themselves into Disney and Universal Studios characters every day. They didn’t need the help of any Fairy Godmother to recreate these moments. They used various household items as props to give their photos a real touch.

They started this creative project on 22nd March and have not stopped after that. They have posed and posted more than 30 photos dressed in full and improvised costumes. They shared the photographs on their Instagram handle, TyersTravel.

They style themselves by taking inspiration from films like Star Wars, Frozen and Harry Potter. They got the idea from a popular Disney tradition called ‘bounding’. In the fashionable theme park there, visitors style their outfits which resembles to the theme of the character without using the costumes. The couple has got even more creative and ambitious with their choice of outfit. They even styled for movies like Mary Poppins and Monster, Inc.

The North Hamptonshire resident said that they thought of doing this for only few days as they would run out of ideas soon but somehow, they managed to do it every day. Initially they kept it very simple by dressing up using jeans, t-shirts and jackets. Now they use costumes sometimes.

Joey and Abby have been together for seven years now and Disney has played an important part in their relationship. Every year the couple visits Disneyland Paris and Disney World in Florida. They even tied the knot in Florida in 2017. After their marriage they had a wonderful vacation at Universal and Disney’s theme parks.

Personal trainer by profession, Abbey and Joey started their travel Instagram account in 2017. They also have a YouTube channel for the same where they share videos of their travel. Since they can’t travel at the moment, Joey said that clicking such photographs has kept them occupied during this lockdown. When he is working, Abbey texts him ideas and when he comes back their outfits are kept ready by her. Joey showers and wears the costumes. They click these amazing photographs which takes 15 to 30 minutes and then comes the editing part which takes 45 to 60 minutes.

Now it’s becoming tricky for them to come up with new ideas every day. The response which they got from their fans helped them to continue it till now. They get a lot of praises from the audience.

Joey said that there were many fake Instagrammers who edited the photos to make everything perfect. They wanted to do the exact opposite by keeping everything real and be absolutely stupid. They are now looking forward to continue this by going beyond Disney and Universal.