We will lack on finding words, if we begin describing the bond shared between fathers and their daughters. It is usually said that having a strong male influence is important in a young boy’s life, but it is equally important for daughters to have one as well, a father figure they look up to. These men recently stepped up the parenting game when they attended Ballet classes with their daughters. 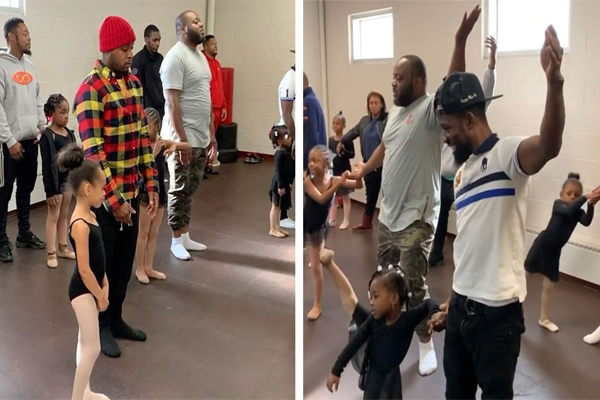 Great dads do anything for their kids, fatherhood is all about encouraging their child’s interests and at times becoming an active participant in their activities. They have a unique bond with their little ones and can step out of their comfort zones just so as to bring a smile on their little one’s face. A dance studio in Philadelphia offers a unique way for fathers to bond with their daughters.

E’chappe Dance Arts Studio offers a special two-hour class that combines ballet with yoga. The dance and arts studio offer dance programmes for ages 3 through 17 covering a swath of styles, including jazz, ballet, hip hop, tap, modern and contemporary. Erin Lee the owner of the studio began offering the Daddy & Me “BOGA” (ballet and yoga) class to give men a chance to bond with their little girls.

In an adorable video shared by Erin fathers can be seen holding hands with their daughters and practicing ballet moves with their daughters. The video quickly began to circulate online, where it gathered attention of many celebrities like Michael Ealy, Kristen Bell and Jennifer Garner. All the three celebrities shared the video on their own pages, singing the dads’ praises.

“Proud to say I don’t know one father who would be afraid to hold down his child this way. Can’t say this was the case growing up. It’s the little things we do that help raise kings and queens. S/O to all the fathers out there and the fellas who showed up for this class. SALUTE!” Michael Ealy wrote.

Kristen Bell wrote: “There are some amazing papas out there!!!” The video has since then gone viral and has already been viewed more than 5 million times and shared over a million times across different platforms. People all over the globe are appreciating the efforts of all the das who participated in the event. Erin noted: “This is what I care about, Good dads being highlighted. This is the part that’s amazing for me.”

It’s true that all parents love their children but there is a special relationship shared by a Father and a daughter. A father’s influence in his daughter’s life shapes her self -esteem, self-image, confidence and opinions. How a dad approaches life will serve as an example for his daughter to build off in her own life.

It is important to actually do things which can sometimes be challenging. Fatherhood is perfectly beautiful at all stages of life! It is an amazing experience to have a father who loves you unconditionally by your side. So, here is to all the Fathers who all are devoting themselves just so as to bring a smile on their kid’s face.