One way to make your kids do good work and arise interest in them is by sharing what you do and why are you so impassioned about it. Londyn Bennett-Dotson, daughter of Devante Bennett-Dotson was very fascinated by his father’s career as a mechanic. She couldn’t be more excited when one day he asked her to grab her own tools and coveralls. 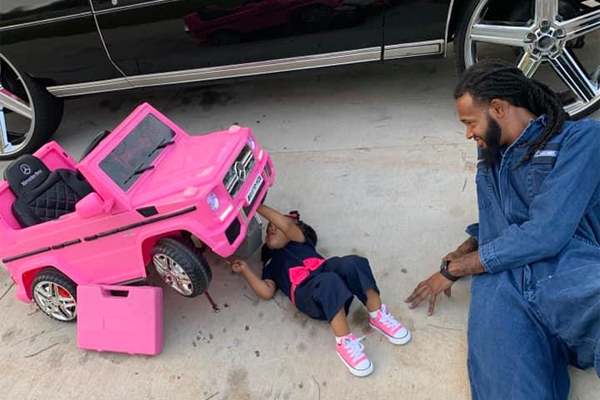 Their birthday was just one day apart and so this idea of having a daddy-daughter photo shoot, courtesy of Londyn’s mother, Ashleigh Sheppard.

Her mother quoted that Londyn was enjoying as much as he was. Also once when the car was lifted up, she got up under it looking at it first. The mother also participated in this act by passing her a wrench and before she knew she had to keep passing her the wrenches like there seriously were that many bolts under there.

Sheppard once came up with an amazing idea after watching her daughter copy her father.

Devante said that in his spare time he’s a mechanic and Londyn gives him a helping hand. This experience made him really happy and why not? Who wouldn’t be happy seeing his daughter be as passionate about something as he himself is?

No doubt this adorable photoshoot of them become trending on Facebook with 34000 shares. They had no intention of having so many shares on these pictures. They were just sharing the pictures for the birthday. It came out as a shock seeing such an enormous amount of shares on their pictures.

What’s a mechanic without her helper?? #HappyBirthdayDaddysGirlMommy comes thru with photography Ashleigh Sheppard

Sheppard told Good Morning America about setting up the shoot, going as far as designing a monogrammed jumpsuit for her little gearhead of a daughter. She also said that Londyn loves doing whatever Daddy does. If he’s outside, she’s outside. If he’s under a car, she wants to be under a car.

Having the same amount of love for cars runs in the family as Devante started working on cars with his grandfather when he was 2 years old as well.

Devante somewhere believes that Londyn may think of becoming a mechanic later on in her life. She was very keen to learn everything about being a mechanic. As soon as he turned his back she’s trying to take tires off her bicycle or messing with my motorcycle or her toy car.

This is so adorable that they are even willing to dismiss the fact that she chose an import as her first car.