When one becomes a parent, he/she is buried with all the responsibilities and is expected to act practically and make decisions wisely. There is no place for any juvenile behavior. This dad had to learn this the hard way. When he shaved his daughter’s head to play a prank on his partner, she did not react the way he expected her to react. 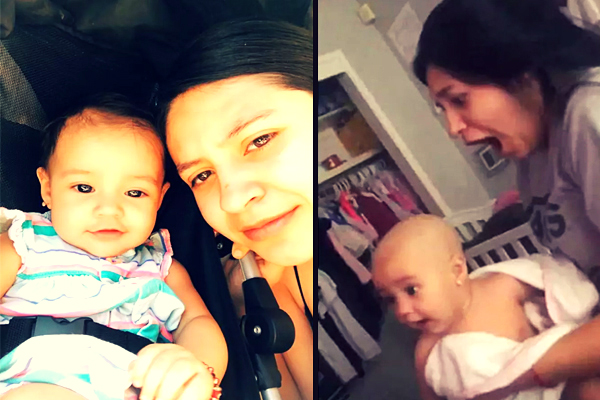 Joshua, dad of a sweet girl was given the responsibility of taking care of her by his wife while she takes a much-needed nap. Jasmin, Joshua’s wife was all tired and wanted to take some rest. She only wanted Joshua to look after their baby and see everything is fine but she did not expect to get the fright of her life.

While Jasmin was sleeping, Joshua had shaved their daughter’s head just so as to play a prank on his wife. Unsurprisingly, Jasmin did not see the funny side at all. The video of the whole incident was shared on twitter and the utter disbelief of the mother when she sees her daughter’s scalp can be seen clearly.

The video had a caption: “The one time I ask him to watch her so I can sleep in and…” Jasmin can be seen screaming, hugging her little baby and crying while a scared Joshua can be heard laughing in the background. The distraught mother says,” “That’s not funny.” Before asking: “Why is she bald? Joshua, that’s not funny.” While she breaks down crying.

The little baby, Jazlyn unaware of what has happened does not seem to care at all and is seen smiling up at her mother. It is a Mexican custom to shave a baby’s head when they are young, it is to help grow ‘thicker and nicer’ hair but the couple was yet to decide when and where to perform the tradition.

Joshua doing it as a prank came as a shock to Jasmin. She said: “My daughter’s father and I had agreed we were not going to do that until that day where I had asked him if he can watch her so I can sleep in a bit longer and he woke me up with that surprise. I was heartbroken because my baby went from a full head of hair to none at all, but as you can see, she was not bothered one bit. Always such a happy baby.”

The video has since gone viral on the micro blogging website twitter and has been watched more than four million times and has been shared foot more than twenty thousand times. Hope Jasmin calms down quickly and Joshua does not get in much trouble and the beautiful Jazlyn grows long and thick locks back.