Even though all the wedding ceremonies are becoming more modernized with the changing time, there exist some people who prefer to have a traditional wedding just as their ancestors did. This Norwegian couple took a traditional road while planning for their wedding ceremony and reignited a tradition that took place a thousand years ago. 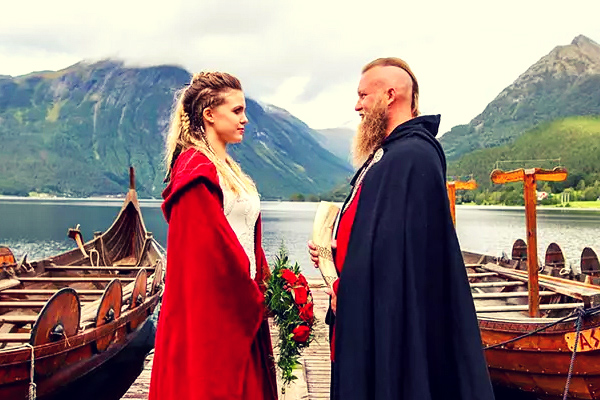 Elisabeth and Rune Daiseth, although being Christians opted to ditch the conventional Christian wedding in favor of an authentic Viking ceremony that took place almost a thousand years ago. A wedding of such type usually includes longboats, a pagan priest and even a blood sacrifice.

The couple had arranged everything for their wedding. They got two authentic longboats in place of standard bridal car and married on the banks of a Norwegian lake. Dressed in full Viking matrimonial attire they incorporated a ‘blot’ ritual.

The ‘blot’ ritual – a cauldron of pig’s blood is put on a pile of stones, then dripped over small figures representing the gods, and then blotted onto the forehead of the couple. Surrounded by 130 guests, all dressed in full costume everyone was dancing to traditional Norse songs. 27-year-old Elisabeth said: “We danced to live music that our ancestors danced to over a millennium ago.”

The couple is a part of a strong movement of Norwegian Viking revivalists and had even named their baby after the legendary Viking hero Ragnar Lothbrok. The movement they are a part of aims to challenge the Vikings’ reputation for violence, rape and pillage. Rane comments, “Vikings were no more terrible than any other group of people living at that time.”

Sharing their story, the couple tells how they met in 2016 and at that time the world of paganism and Vikings was unknown to Elisabeth. Rane introduced her to his belief and the world of Vikings. She said: “Rune completely opened up a new world for me, and I soon fell in love with the people and the spirituality of it.”

Rane proposed Elizabeth a year later at a Viking Festival. All of their friends from the movement were excited to be a part of the ‘first Viking wedding since the downfall of the fierce warriors nearly 1,000 years ago’.

Rane explained: “We had two longboats built, they were made by a local shipbuilder. The traditional dress is not easy to find, so another friend helped us with that. Finally, a man who we had met at a festival one year agreed to be the gothi – the equivalent of a priest – for the ceremony.”

Initially, there were doubts about Rane’s beliefs and his mother was unsure about the whole Vikings ceremony idea. Rane noted: “I come from a very Christian family, When I announced that we were not going to have a Christian wedding my mum was a little unsure about it. But I think she has now come to accept it. She can see how happy paganism makes me and how it has helped me get my life together.

He continued, “Before I was a Viking, I didn’t have a wife, a baby and a house – now look at me.” It all ended happily for the couple and they had the wedding of their dreams and everyone is happy for them.