It is important to feel secure and comfortable over a place where you work and have to go regularly. One could only be comfortable, where he/she has good and supportive people around him. Like this, a woman felt so warm and homely when her co-workers showed their support after the treatment on her birthmark. 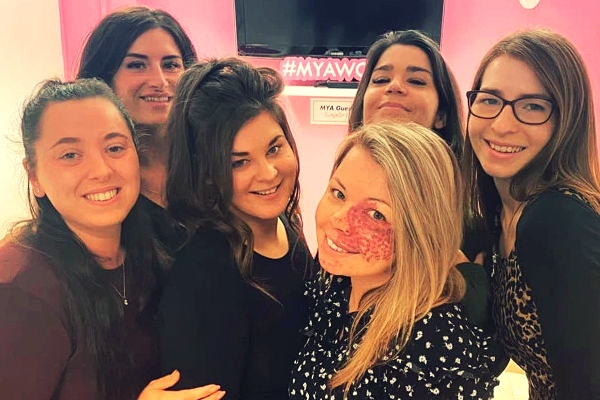 Amy Elsegood, a 27 old woman got treatment for a port wine stain which covers left side of her face. To hide her birthmark, she used to wear lot of makeup whenever goes to her workplace. She was diagnosed and the cosmetic surgery adviser had her laser treatment to decrease the redness of her birthmark. After treatment birthmark was swollen and needed some time to recover, Amy was not allowed to apply any cosmetic over it. So Amy had to go office without any make-up and she felt so weird about her stain.

However, Amy’s colleagues made this thing easy for her as they all turned up bare faced and by opted to go makeup free in solidarity. Amy was so much overwhelmed by their soft-hearted and loving gesture that she took this thing to social media. Amy wrote “I had the surgery last Thursday, Jan 23, and it was my first day (back at work) just four days later.” She added “I always wear make-up to work, even though all my colleagues know I have the birthmark.”

Amy told about her nervousness and wrote “The girls I worked with knew I was feeling nervous about returning to work without any foundation but I never expected them to do anything like that – I was overwhelmed by it all.” She continued “I’ve always been conscious of my birthmark and I wear a lot of make-up to cover it so I was worried when the recovery process meant I couldn’t wear it for a week.” She also mentioned about the difference she felt between her colleagues and people outside her office.

Amy with all support is a brave woman who used her birthmark to raise awareness and highlight her own skills. Amy used to cover her mark superbly so she showcased her talent on Instagram and became make-up ambassador, as well as an ambassador for her local Birthmark Support Group. She added “The girls at work said they didn’t want me to be alone or feel like I was.” She also wrote “I’d been so nervous but they made me realize it was nothing to be ashamed of.The one thing they all kept saying was that they got ready for work so fast, which made me laugh.”

Amy’s manager at MYA Cosmetic Surgery said “As the manager of MYA’s Patient Bookings Department, my number one priority has always been to ensure the girls support each other in every way possible. The quote in our department reads ‘Behind every single woman is a tribe of other successful women who have her back.’ She told about how they have 10 different women of different ages, locations and personalities support each respect each other.

The manager wrote “I sent an email out to the team before Amy’s return to work, suggesting the idea of us all coming to work make-up free for her first day back, simply to show her some support and to show that we’re all behind her”. And continued “A small act of kindness can go a really long way and I’m so proud of my team and what we achieve each and every day.”