In December 2014, a Norwegian Forest cat went missing and the owners were distraught. The couple, Tanya and Jonathan Irons adored their cat and it was the cutest little thing. They had left no options when it came to finding him. Posters, search party, door to door search everything was done. The cat went missing for about 14 months but was fortunately reunited with the family. It had been living in the nearby pet food factory. The couple found it hilarious and shattering at the same time. 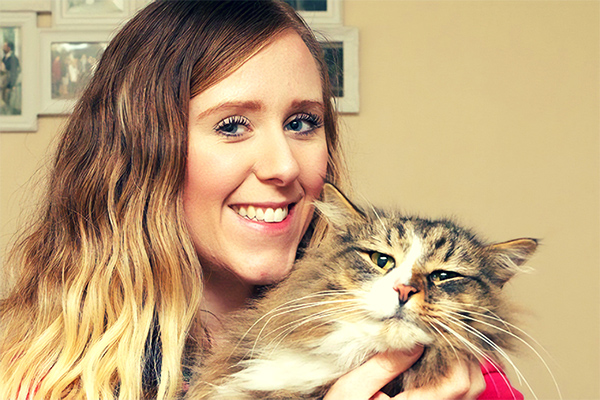 The couple even launched a Facebook appeal and filled the neighborhood with missing posters but no results came from it. Tanya in an interview told that Clive was a very lively, adorable and mischievous cat somebody must have surely taken him in. But the tables were soon turned when a staff of pet food factory not more than two miles from the couple’s home found the Clive in the factory having the time of his life.

The funny part was that when the staff took Clive to a vet, the microchip revealed that he belonged to the Iron family. He was registered with Tanya and Jonathan Irons, who were living just two miles away from the pet food factory. The production supervisor had seen glimpses of the cat running past him, cat droppings and when the cat pet food started going missing; the supervisor and the staff knew that it was a cat who was trying to outsmart them for so long. Production supervisor at Kennelgate Pet Superstore Diane Gaskill later set a trap to catch the cat.

Late night the trap was set and the next morning they found the cat trapped in it. The cat was jeering and sputtering in anger since he had been caught. When the staff found out that he belonged to the Irons they called them straight away. The couple could not believe that they found their cat. The retail manager was trying to trap the cat for months and concluded that the cat was living his life as if he was living in a penthouse, only eating and pooping. Their must has been some holes somewhere which helped the cat to get in.

Finally, the family met with their cat, their joy knew no bounds. To them, Clive was still perfect just a lot rounder and chubby. Now they know who was eating Clive’s brother food. The couple will not try to put the cat on diet or anything; they love him the way he is.