Losing a parent at a young age is the most devastating loss that a child can suffer. It is difficult to describe the pain and heartbreak from this loss. A 13-year-old boy broke into tears when he received a belated gift from his dad after five days of his father passing away. 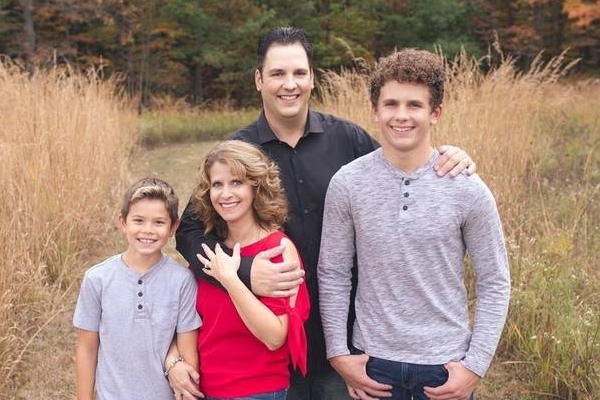 A young boy, Logan Kavaluskis of Hudsonville, Michigan, lost his father because of blood cancer. A video of him went viral online in which he was seen receiving a puppy as a belated gift from his late father and this brought the teen to tears.

This video also made thousands of people on the internet cry with the boy. His father, Joe Kavaluskis had been tolerating multiple myeloma for almost a decade. Joe’s family friend created a page in 2018 which gave information that Joe was diagnosed with the blood cancer around 2010.

Joe’s wife Melanie also told about Joe’s fight with the disease on the page and shared “That first year, we battled with chemotherapy and a stem cell transplant”. She continued “That bought us almost three years of good health. This type of cancer really never achieves remission, but we were as close to that as possible.” With passing time Joe’s cancer level was rising, Michelle explained “he would battle them back down with chemotherapy”. She told how his life became a roller coaster and added: “Up and down, for three years.”

Joe’s cancer was becoming more and more aggressive day by day and it was getting difficult and an exhaustive battle for Joe. So, Joe could see what was coming and it was not long that the13-year-old lost his father.

Logan always wanted a puppy as his pet and got it from his father on 13th January, after his father’s death. Joe told Logan’s cousin to give his birthday gift to Logan after he was gone. As Joe was allergic to animals and due to his cancer, it was impossible to keep a family dog while Joe was alive so Joe arranged a puppy for Logan after his death.

When Logan met his new pal “Indy”, he was very much amazed as seen in the video. His cousin Jon told him “That’s from your dad. That’s your dog.” “Really?” he asked. Jon replied “Yes, he is yours.” He added “Your dad wanted you to have a puppy. Do you love him? He is all yours.” Logan loved his gift from all his heart and said “the best gift I’ve ever gotten from my dad.” His mom Melanie also loved the gift and thought it was an amazing effort by his husband which will help her son to heal.

She told Indy brings “so much love, and comfort, and distraction, because we can’t sit still”. But she also hoped that her husband’s this gift would be a great life teaching for her son that how one can change negative situations into positive ones. She continued “It’s really important to us” and added “to pay it forward”.