Many of us are inspired by celebrities, their looks and how they maintain themselves on a regular basis. Nothing comes easy especially when it comes to staying in shape, being constantly under the limelight. Like many of us, this guy Mark Webster was trying hard to be fit when he decided to follow the diet of “The Rock”. 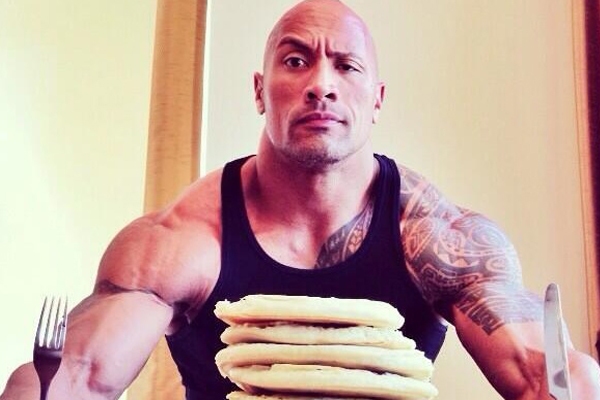 Being in his late 30s, Mark Webster had some realizations about his health and fitness. He got quite serious about this topic when he thought about the future of his daughter and how he wants to raise her. There used to be a time when he had a good physique and overall good health. But it all changed in a span of a few years.

He took a look in the mirror and disappointment hit him real bad. That was the turning point in his life. He wanted to change and there was no point in waiting for even another moment to take a step ahead in this direction. He was highly inspired by Dwayne “The Rock” Johnson and wanted to follow his footsteps and live a fit life like him.

Dwayne Johnson follows a very strict diet which is quite obvious from his build. He is very firm about his eating habits and does not compromise with them. Webster collected all the information regarding his diet from the internet and social media. He knew that this is not going to be easy but he was dedicated.

Even though Webster had been on a fitness routine for the past two years, but this diet and regime that Johnson follows was not on the same lines. It was stern as one would expect it to be and one needs a strong heart to follow it.

Webster started his gym at 5:40 a.m. after which he has breakfast. This is what his breakfast included: two hard-boiled eggs, 10 ounces of steamed cod and two cups of oatmeal. You better note here – no cheat days! Webster had a perfect idea to avoid cheating on his diet by having a systematic arrangement of food in his refrigerator. This does help, we assure!

In case you are interested, which we know most of you would be, this 30-day diet of The Rock included 8 ounces of cod, 1 cup of veggies and 12 ounces of sweet potatoes. The replacement for sweet potatoes is 2 cups of white rice. Another addition in the 7 daily meals of this diet is 8 ounces of chicken. One needs to be dedicated in order to follow this.

Apart from the diet, his fitness regime also had a tough workout of the muscle groups including arms, legs and shoulders. A healthy diet accompanied by a proper gym training is the key to achieving the fitness like that of “The Rock”.

Set an early alarm (better not snooze it!) and start your day with a good workout. This is what Webster did and now he has managed to look much better than before. But this is not the end for him. He plans to continue with this regime for as long as he can. He has been noticed and appreciated by Dwayne Johnson himself and that just added to his motivation.

We know this is quite inspiring and you are planning to follow this regime too. We wish you good luck and hope you achieve your dream fitness!