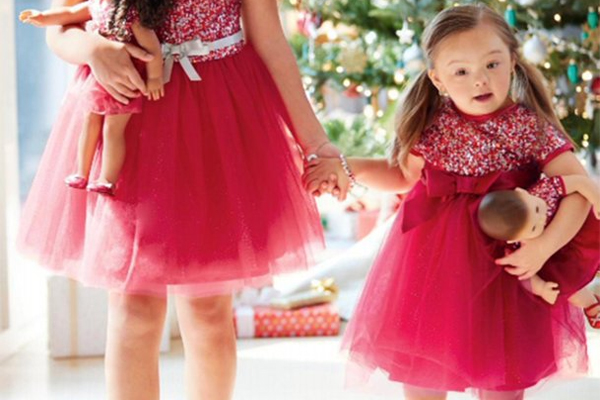 The American Girl Holiday catalog has featured Ivy, 4-year-old with Down Syndrome on its cover and ever since the social media has been blowing up like anything. Ivy is holding her doll and is standing a Christmas tree. She is featured on the cover and many other places. Ivy’s mother shared that it is a very big deal for her and people around the globe think that it is a big deal for everyone.

People suffering from Down Syndrome have problems adjusting to new places and new people. They like their privacy and personal space. You cannot go and talk to them anytime you want. One has to make sure that they are okay and comfortable with your presence. And during a photoshoot, there are so many unknown faces around you from the cameraman to a light man to hairstylists and assistants.

Thus it makes a big deal for Ivy as she not only modeled for the catalog but also adjusted to so many strangers around her. Yahoo Lifestyle shares some pictures of the shoot online and it gained a lot of attention on all the social media handles. With so many likes, retweets and shares both the company and the girl’s parents were happy about the shoot.

Ivy’s mother shared her thoughts on the shoot and told that it is very rare for a company to put a person with Down Syndrome as a cover of their catalog. She has never seen anyone with Down Syndrome in the print catalogs of any company. While she tells that it is a big deal for her daughter and everybody else she wishes that it becomes newsworthy and normal shortly.

It is indeed a big moment for inclusiveness she believes that it should be normal and people should treat the people having Down Syndrome normally. But they should make sure that they are comfortable around and with them. American Girl spokesperson shared that with the People Magazine that Ivy is wonderful and delight to work with.

They also shared that, “She’s adorable and great to work with, and the shots we captured with her for our holiday catalogs are beautiful. We look forward to continuing our work in celebrating all girls.” This is so positive for all the people suffering from Down Syndrome and their parents. This not only makes people with Down Syndrome feel normal but their parents as well.

Ivy’s mother shared that Ivy’s main highlight of the whole shoot was the time she spent in the makeup and hair trailer. She loved so many people taking care of her and interacting with her once she was comfortable with them. Her mother shared that she is very proud of her daughter and wishes the best to everyone else who gave such beautiful memories to her daughter Ivy.