Is it possible to finish 18 yoghurts in for a 3-year-old? Well, think twice!! It happened in a house in Nottingham when Arron Whysall's daughter finished it all in just around 10 minutes. 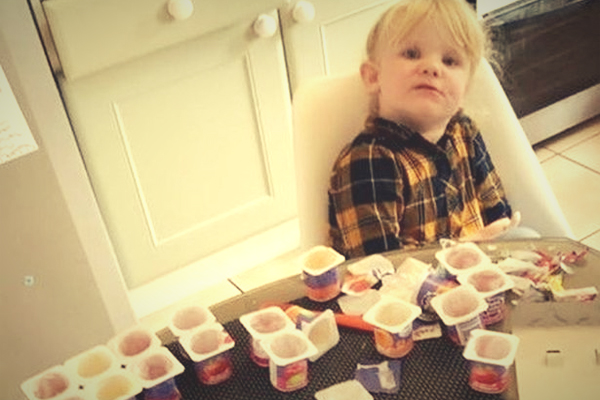 The internet caught its eyes on the girl who ate 18 cups of Petit Filous. It was a fine afternoon when Arron decided to do some gardening while his fiancée was busy doing her hair and their kids were busy doing their own stuff. After all, work is important.

A few moments later his son Oskar,6, came to him complaining about his sister. He saw his daughter, Oliver,3, eating a cup of yogurt and thought it was something that is not to be done in the house.

Arron found it quite okay unless the yogurt was not spread on the floor. A messy house is nobody’s preference. After around 10 minutes, Arron finished his work in the garden and decided to check on his daughter. He was expecting a wall full of yogurt or a floor spread with yogurt. Instead, he was shocked to see that there was no mess.

There was a girl sitting with 18 empty cups. In disbelief, he asked her that if she had finished it all? She replied with a yes and asked for more. It was a funny moment for Arron and he called Billie Hardie, his fiancée to have a look. She couldn’t believe her eyes. They were stunned by Oliver’s appetite.

He cleaned her face and then he realized that he hadn’t taken a photo of the moment. He took a snap and uploaded it on Facebook. Facebook has this responsibility of making these things viral. It reached 10,000 shares in a blink of an eye.

They were impressed by how she took the yogurt out of the fridge, opened it, and ate all of it. They found it funny and were impressed by their daughter. Billie Hardie, 26, looks after children in order to earn some money. Therefore, she has to keep extra supplies in her house. Yeah! That’s from where 18 yogurts came in their house. Now they have started to keep their supplies beyond the reach of Oliver.

Arron and Billie had to go for a movie night that evening and grandparents of the kids were looking after them that night. They informed them about the incident and cautioned them that she could have an upset stomach that night.

But she was absolutely okay and they were amused. But they should be expecting this as she is in love with snacks and is always ready to eat some. She is a mischievous girl and where there is something out of the box, there is Olivia.