A mother of three kids found that she had won 1 million pounds from the EuroMillions lottery just ten minutes after her breast cancer defeating reports were delivered and read. The South Wales laundry employee Lynne Price aged 55, thus decided the celebrate the two good news by taking a relaxing bubble bath-What a wonderful day it must have been. 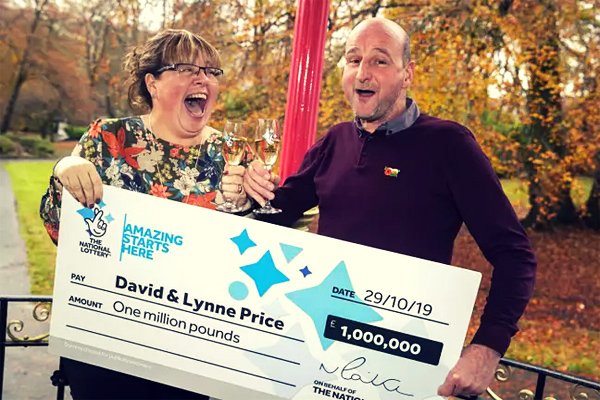 According to the reports of The Sun, Price was resting at her home situated in New Tredegar, when a letter was delivered to her stating that her breast cancer was gone, and her reports were now clear, she was obviously elated, and while she was still enjoying the moment, her husband David walked in hastily with another piece of good news- the family had won a million in the lottery. In her interview with The Sun, Lynne mentioned that she was so shocked that her reaction was completely random and rude; she refused to tell what it was though.

She also added that she began trembling, and although she always has something or the other to say, this time she was silent. She then went to the bathroom, to have a soothing bubble bath for two hours, which helped her process all the information. Her 53-year-old husband, David checked their ticket while he was at work and discovered that they had the winning codes mentioned on their ticket. And beyond a doubt, the man too is equally excited about the good time their family is seeing.

He said that when he reached home to tell his wife about them winning the lottery, she already had big news for him, which by the way was a piece of bigger news for David, according to him. In the year 2015, Lynne was diagnosed with breast cancer and she had been going through the chemo sessions since then, this year towards the end of October she went through another scan following which she was given an all-clear signal. The couple is now intending to go for a long and exotic vacation in an attempt to avoid an upcoming event in their state- and we don’t blame them.

While on their tour, they’ll also be celebrating their thirty-third wedding anniversary- strange, feels as though a bowl-full of good fortune slipped from God’s hand onto them. It was also discovered that the duo is also a distant relative of Ade Goodchild, the winner of 71 million, while Judith the winner of the 1990s jackpot prize, is David’s sister.

Their luck is so much in their favor that David has been nicknamed ‘Lucky Dai’ by his colleagues at the British Airlines-such an amazing thing to have three big winners in the family although the name was kept mockingly, now no one would dare say that.

The couple is a regular lottery ticket buyers-they buy tickets, waste money and get nothing except for petty prizes but this time fate had different ideas, the duo as of now is still going to work their respective jobs before they conclude on what to do with the fortune, however, one thing is for sure, that they’ll be taking a few fancy vacations, one being the Everest climb. Of course, Barbados would have been a good idea, but the Himalayas are beyond comparison.

A National Lottery spokesperson mentioned that the Price couple is such an amazing story in his 23 years long career-and we cannot help but agree!